What's in Store for the 2.2.0 Update (Notification)

Starting February 9, 2018 at 7:00 AM UTC, a new event, Tap Battle: Illusory Dungeon, will begin. Even level 1 Heroes can help out in this event, so don't hesitate to dive into the depths!

You can learn more about Tap Battle: Illusory Dungeon from the in-app notification released on February 9, 2018 at 7:00 AM UTC.

Starting February 9, 2018 at 7:00 AM UTC, useful maps for training your Heroes known as Special Training maps will appear on a daily rotating basis. The enemies will keep coming, making them great for earning EXP and SP.

After Day 5, the map cycle starts over again with Day 1.

There are five different difficulty options, starting from level 5 and up to level 34.

The map names show what type of unit will have an easier time growing on that map. You can also earn rewards, like Orbs

and Blessings, the first time you clear these maps, so be sure to try them out.

For more information, check the in-game notification released on February 9, 2018 at 7:00 AM UTC.

Starting February 9, 2018 at 7:00 AM UTC, seven Grand Heroes will appear on a daily basis in Special Maps.

Difficult Grand Hero quests will also be available for one year, until February 8, 2019 at 6:59 AM UTC.

For more information, check the in-game notification released on February 9, 2018 at 7:00 AM UTC.

■ Adjustments to the Battle Screen Layout

The layout of the Battle screen has been adjusted, adding a new way to access events. Use this new Events option to play Tap Battles, Tempest Trials, and other events. The ! mark will appear when an event is active, so that's your sign to dive on in. Also, with the March Update an entrance to a new mode is planned to be added to the upper-left of the screen. This new mode is planned to contain maps that can only be played with Legendary Heroes and Heroes that have had a blessing conferred on them. You can get Blessing items through Legendary Hero summoning events, Special Training Maps, and other events. Prepare your Blessings as you look forward to this new mode! 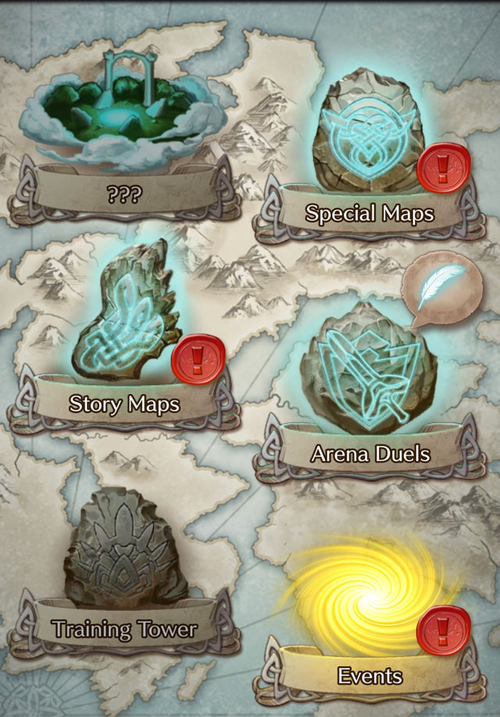 ■ New weapon skills for certain Heroes, as well as more weapon options, in the Weapon Refinery 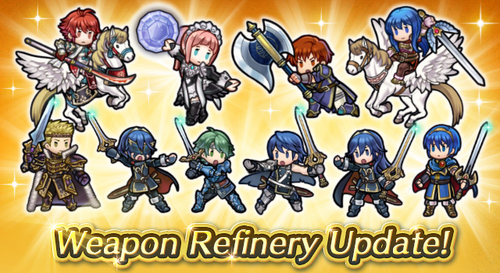 The following weapons can be upgraded or can gain additional special effects via the Weapon Refinery.

This skill can be learned by: Zephiel: The Liberator

This skill can be learned by:

There are three upgrade variations for Falchion based on the ally:

This skill can be learned by: Hinoka: Warrior Princess

This skill can be learned by: Raven: Peerless Fighter

This skill can be learned by: Felicia: Maid Mayhem

Give your favorite Heroes more chances to shine with these new weapon skills and upgrade options in the Weapon Refinery!

And that wraps up the added features and changes for Ver. 2.2.0. We hope you continue to enjoy playing Fire Emblem Heroes!