What's In Store for the 3.8.0 Update (Notification)

We would like to introduce the new features and changes in the 3.8.0 update.

・ Aether Raids has been updated.
・ A new event, Lost Lore, has been added.
・ New weapon skills and weapons to refine have been added.


We would like to introduce the new features and changes in the Ver. 3.8.0 update.

■ A New event, Lost Lore, has been added 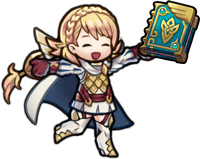 Send Heroes to scout out other worlds in order to recover lore for the Heroes' Saga. After sending Heroes out, you must await their return.

You can obtain rewards like Orbs and Hero Feathers from Lost Lore, so don't be afraid to send some Heroes out on a scouting mission!

Further details will be provided in a notification before the event begins. Lost Lore was also introduced in the latest Feh Channel, so check it out if you haven't already!

Book of Orchids
Hero who can learn this skill: Mae: Bundle of Energy