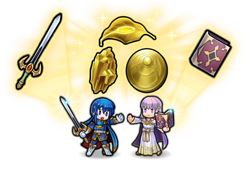 The Weapon Refinery is a feature introduced in Version 2.0.0 where the player can upgrade and evolve weapons. Players must first clear Chapter 13: Diabolical Bloodline and the Intermission: The Rite of Blades from Book I, in order to access the Weapon Refinery under the Ally Growth menu.

Units need to learn the weapon before it is eligible to be upgraded or evolved.

Upgrading a weapon can give it a modified effect, an additional effect, bonus stats, or a combination of these. The same weapon can be upgraded multiple times and swapped between them like a normal weapon through Equip Skills.

Depending on the which upgraded option was chosen, the user will have a glow when equipped with the upgraded weapon:

The following is an automatically updated list of skills that can be upgraded by using Arena Medals and Divine Dew.

The following weapon skills can be upgraded by using Arena Medals and Refining Stones.

Evolution allows a weapon to be transformed into a different weapon, possibly losing effects along the way. For example

Aura can be evolved into

In other languages[edit | edit source]