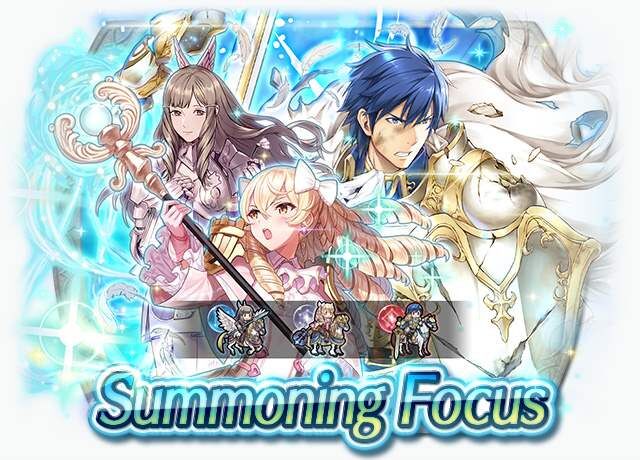 5★ Heroes who debuted between the game's launch and August of 2018 appear as focus Heroes, and the focus lineup changes each week! 5★ focus Heroes have an initial appearance rate of 4%!

The prince of Ylisse, awakened to new power.
Bravely rides into battle on his stalwart steed.
Appears in Fire Emblem Awakening.

Sealed Falchion
Mt: 16 Range: 1
Effective against dragon foes. At start of combat,
if unit's HP < 100%, grants Atk/Spd/Def/Res+5
during combat.
This skill can only be equipped by its original unit.

Aether
Cooldown: 5
Treats foe’s Def/Res as if reduced by 50% during
combat. Restores HP = half of damage dealt.
Cannot use:

Chill Def 3
At start of turn, inflicts Def-7 on foe
on the enemy team with the highest
Def through its next action.

Sword Valor 3
While unit lives, all sword allies on team get 2x SP.
(Only highest value applied. Does not stack.)
Cannot use:

"Seems it's past time that I start my daily training. If I slack off, somebody will scold me—I just know it."

Flower Lance
Mt: 16 Range: 1
At start of combat, if foe's HP ≥ 75%, grants
Atk/Spd/Def/Res+4 to unit during combat.
This skill can only be equipped by its original unit.

Atk/Def Link 3
If a movement Assist skill (like Reposition,
Shove, Pivot, etc.) is used by unit or targets
unit, grants Atk/Def+6 to unit and target ally
or unit and targeting ally for 1 turn.
Cannot use:

"Would you like to try some flower fortunes with me? Don't worry about getting an unlucky result. That just means you'll have to work hard to make sure it doesn't come true!"

A proud noble from one of Ylisse's most
well-to-do houses. A Shepherd and Lissa's
best friend. Appears in Fire Emblem Awakening.

Trilemma+
Mt: 12 Range: 2
After combat, if unit attacked, inflicts the following
status on target and foes within 2 spaces of target
through their next actions: "If unit has weapon-
triangle advantage, boosts Atk by 20%. If unit has
weapon-triangle disadvantage, reduces Atk
by 20%."

Imbue
Cooldown: 1
When healing an ally with a staff, restores an
additional 10 HP to target ally.
This skill can only be equipped by staff users.

Dazzling Staff 3
Foe cannot counterattack.
This skill can only be equipped by staff users.

Staff Valor 3
While unit lives, all staff allies on team get
2x SP after combat or after using healing
Assist skills. (Only highest value applied.
Does not stack.)
This skill can only be equipped by staff users.

"You always seem so busy. Please, leave the patrols to me. I shall deliver a sound thrashing to any unsavory individuals I should happen across."