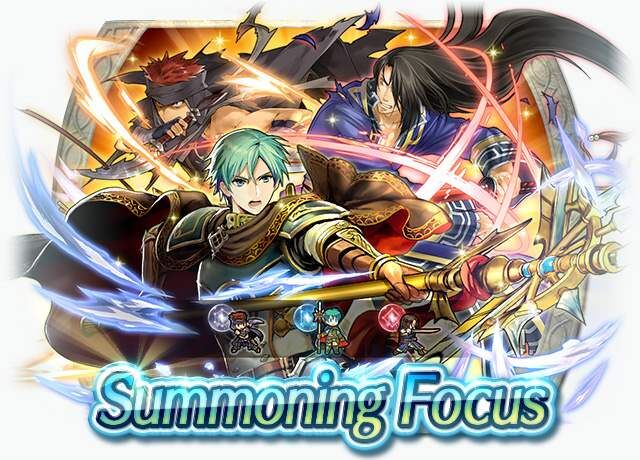 5★ Heroes who debuted between the game's launch and February of 2019 appear as focus Heroes, and the focus lineup changes each week! 5★ focus Heroes have an initial appearance rate of 4%!

A vicious swordsman from a family devoted to
mastering the blade. Known as the Sword Demon.
Appears in Fire Emblem: The Blazing Blade.

Nameless Blade
Mt: 16 Range: 1
Accelerates Special trigger (cooldown count-1).
This skill can only be equipped by its original unit.

Reprisal
Cooldown: 2
Boosts damage by 30% of damage dealt to unit.
Cannot use:

Desperation 3
If unit’s HP ≤ 75% and unit initiates combat, unit
can make a follow-up attack before foe can
counterattack.

"I have taken up my family's blade, which means that I am now one with my weapon."

Prince of Renais. Eirika's twin. Cares
deeply for his sister. His confidence has
sometimes put him in danger. Appears in
Fire Emblem: The Sacred Stones.

Siegmund
Mt: 16 Range: 1
At start of turn, grants Atk+3 to adjacent allies for
1 turn.
This skill can only be equipped by its original unit.

Seal Def 3
Inflicts Def-7 on foe through its next action after
combat.
Cannot use:

Threaten Def 3
At start of turn, inflicts Def-5 on foes within
2 spaces through their next actions.

"I am Ephraim of Renais, a prince and skilled spearman. So, point me at my enemy. I'll get to work."


An emotionless member of the Black Fang
assassins. Known as the Angel of Death.
Appears in Fire Emblem: The Blazing Blade.

Deathly Dagger
Mt: 11 Range: 2
After combat, if unit attacked, inflicts Def/Res-7 on
foe through its next action. If unit initiates combat,
deals 7 damage to foe after combat.
This skill can only be equipped by its original unit.

Threaten Spd 3
At start of turn, inflicts Spd-5 on foes within
2 spaces through their next actions.

"We are making conversation, aren't we? All right. The best time to assassinate someone is when the target is eating or sleeping."