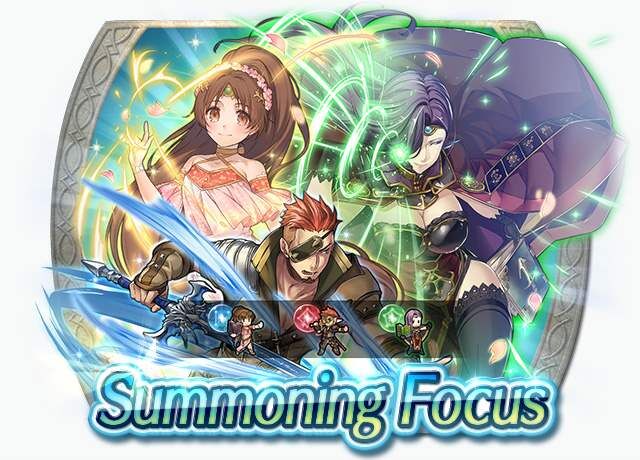 5★ Heroes who debuted between the game's launch and February of 2019 appear as focus Heroes, and the focus lineup changes each week! 5★ focus Heroes have an initial appearance rate of 4%!


A mercenary who will take on any job...if he's
paid enough. His identity is a mystery but his
skills are unquestionable. Appears in Fire
Emblem Echoes: Shadows of Valentia.

Golden Dagger
Mt: 16 Range: 1
Accelerates Special trigger (cooldown count-1).
This skill can only be equipped by its original unit.

Aegis
Cooldown: 3
If foe is 2 spaces from unit, reduces damage
from foe's attack by 50%.
Cannot use:

"You've got another job? Ya know, working yourself to the bone never helped anyone. Once you're back, I'll show you how to unwind for a change."


Daughter of Pontifex Miloah from Archanea.
Inherited the light tome Aura. Wants to
avenge her father's death. Appears in
Fire Emblem: Mystery of the Emblem.

Aura
Mt: 14 Range: 2
If unit initiates combat, restores 5 HP to adjacent
allies after combat.
This skill can only be equipped by its original unit.

Fortify Res 3
At start of turn, grants Res+4 to adjacent allies for
1 turn.

"I will avenge my father by destroying Gharnef with my inheritance, the great tome Aura!"

A mage hired by Grieth. Cool but flamboyant.
Vowed vengeance upon her father, Jedah.
Appears in Fire Emblem Echoes: Shadows of
Valentia.

Dark Excalibur
Mt: 14 Range: 2
Deals +10 damage when Special triggers.
This skill can only be equipped by its original unit.

Res Ploy 3
At start of turn, inflicts Res-5 on foes in cardinal
directions with Res < unit’s Res through their next
actions.

"Might be time for a manicure... My magic always feels its strongest when my hands look their best."