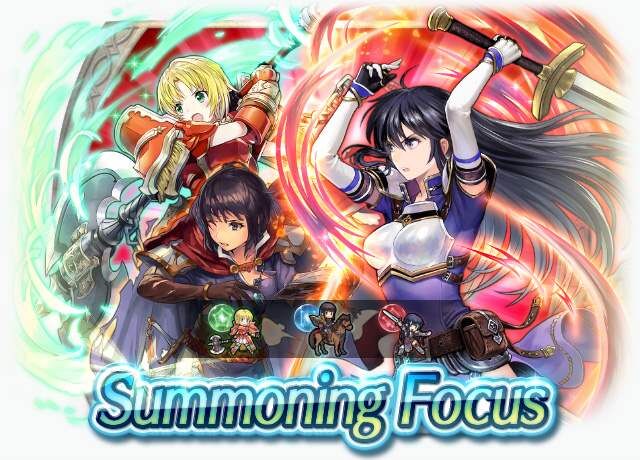 
Princess of Isaach, master of the sword, and
descendant of the crusader Od. She fights for
her homeland. Appears in Fire Emblem:
Genealogy of the Holy War.

Ayra's Blade
Mt: 16 Range: 1
Grants Spd+3. If unit's Spd > foe's Spd, grants
Special cooldown charge +1 per unit's attack.
(Only highest value applied. Does not stack.)
This skill can only be equipped by its original unit.

Regnal Astra
Cooldown: 2
Boosts damage by 40% of unit's Spd. (Skill
cannot be inherited.)
This skill can only be equipped by its original unit.

Desperation 3
If unit’s HP ≤ 75% and unit initiates combat, unit
can make a follow-up attack before foe can
counterattack.

"Flowers? Dresses? No thank you. I don't have time to waste. If I have some time, I grab my sword and train."


A mage knight in Friege's army. Her
ideals sometimes put her in opposition
with her beloved brother, Reinhardt.
Appears in Fire Emblem: Thracia 776.

Dire Thunder
Mt: 9 Range: 2
Inflicts Spd-5. If unit initiates combat, unit attacks
twice.
This skill can only be equipped by its original unit.

Ward Cavalry
Grants Def/Res+4 to cavalry allies within 2 spaces
during combat.
Cannot use:

"You know, my brother, Reinhardt, is quite superb in battle. Some people even say he's the second coming of one of our world's greatest crusaders."


A young soldier from a small village in Grado.
She is honest and sincere. Appears in
Fire Emblem: The Sacred Stones.

Grado Poleax
Mt: 16 Range: 1
Accelerates Special trigger (cooldown count-1).
This skill can only be equipped by its original unit.

Sacred Cowl
Cooldown: 2
If foe is 2 spaces from unit, reduces damage
from foe's attack by 30%.
Cannot use:

Armor March 3
At start of turn, if unit is adjacent to an armored
ally, unit and adjacent armored allies can move
1 extra space. (That turn only. Does not stack.)
Cannot use:

"I admire General Duessel...and I train every day in the hope that, someday, I can be a little bit like him."