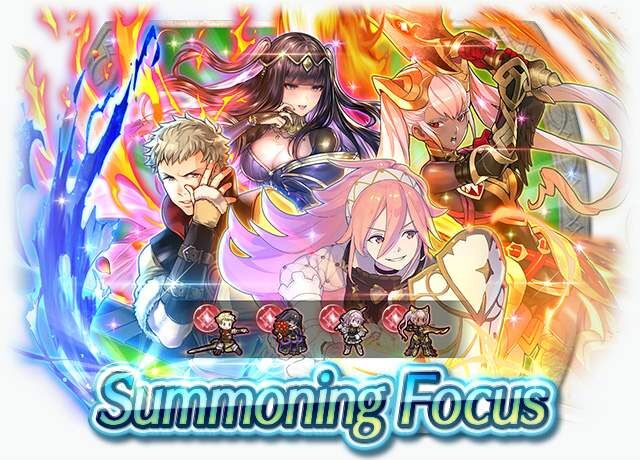 Now is your chance to pick up four Heroes who have gained new skills as 5★ units!

Laslow's daughter. Cheerful and not even
slightly shy. Looks up to cool women.
Appears in Fire Emblem Fates.

Soleil's Shine
Mt: 16 Range: 1
Unit and foe cannot counterattack.
This skill can only be equipped by its original unit.

Blazing Wind
Cooldown: 4
Before combat this unit initiates, foes
in an area near target take damage equal
to 1.5 x (unit's Atk minus foe's Def or Res).
Cannot use:

Drive Res 2
Grants Res+3 to allies within 2 spaces during
combat.

"It's good to meet you! I'm Soleil. My father's name is Laslow. I'll fight hard for all the cuties out there!"

A mage from Plegia with a dark side and a
possessive streak. Determined to get her hands
on the festival's prize, a bouquet. Appears in
Fire Emblem Awakening.

Múspell Fireposy
Mt: 14 Range: 2
Grants Spd+3. During combat, boosts
unit's Atk/Spd by number of allies within
2 spaces × 2. (Maximum bonus of +6
to each stat.)
This skill can only be equipped by its original unit.

Atk/Spd Bond 3
If unit is adjacent to an ally, grants
Atk/Spd+5 during combat.

Spd Feint 3
If a Rally Assist skill is used by unit or targets
unit, inflicts Spd-7 on foes in cardinal directions
of unit through their next actions.
Cannot use:

"Ahh, I feel so relaxed right now... Maybe I'll cast a little curse on you."

The second princess of Múspell, the Kingdom
of Flame. She sees herself and the blade she
wields as one and the same, and keeps her
emotions in check.

Laevatein
Mt: 16 Range: 1
Grants Atk+3. Grants bonus to unit’s Atk = total
bonuses on unit during combat.
This skill can only be equipped by its original unit.

Atk/Def Link 3
If a movement Assist skill (like Reposition,
Shove, Pivot, etc.) is used by unit or targets
unit, grants Atk/Def+6 to unit and target ally
or unit and targeting ally for 1 turn.
Cannot use:

"My blade is Laevatein, the Searing Steel... We share a name. You can't separate us."

Lissa's son who tends to be overly theatrical.
He loves to give weapons dramatic names.
Appears in Fire Emblem Awakening.

Atk/Def Bond 3
If unit is adjacent to an ally, grants Atk/Def+5
during combat.

"Hey, let's think up some special technique names! Shouting as you summon is sure to improve results!"