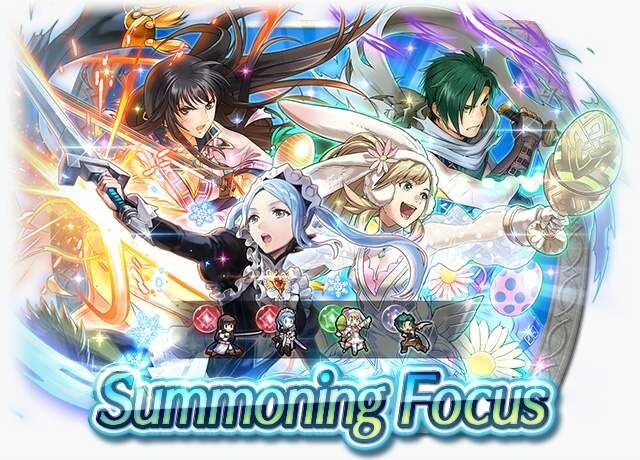 Now is your chance to pick up four Heroes who have gained new skills as 5★ units!

Princess of Askr and Alfonse's younger sister.
She cajoled her brother into participating
in the Spring Festival with her.

Muninn's Egg
Mt: 14 Range: 2
Grants Res+3. At start of turn, if unit's
HP ≥ 50%, inflicts Atk/Res-5 on foe
on the enemy team with the lowest Spd
through its next action.
This skill can only be equipped by its original unit.

Live for Bounty
If unit survives, get 1.5x shards/crystals from a
Training Tower map. (Only highest value applied.
Does not stack.)

Res Tactic 3
At start of turn, grants Res+6 to allies within 2
spaces for 1 turn. Granted only if number of
that ally's movement type on current team
≤ 2.

"My mother loves festivals. I'm sure she'd be delighted if I dropped by to say hello dressed like this!"

A traveling swordswoman in search of
her brother. Her impressive skills and
good looks have enlivened many arenas.
Appears in Fire Emblem: The Blazing Blade.

Even Spd Wave 3
At start of even-numbered turns, grants Spd+6
to unit and adjacent allies for 1 turn. (Bonus
granted to unit even if no allies are adjacent.)

"Saw me training, did you? You might think I have no need to, but the habit is ingrained deep within me."

A Nohrian maid who serves Corrin. Tends to be
serious. Has a twin sister, Felicia. Appears in
Fire Emblem Fates.

Hoarfrost Knife
Mt: 14 Range: 2
Accelerates Special trigger (cooldown count-1).
If unit initiates combat and foe uses sword,
lance, axe, dragonstone, or beast damage,
grants Def+20 during combat, and if foe can
counter, unit makes a guaranteed follow-up
attack. After combat, if unit attacked, inflicts
Def/Res-7 on target and foes within 2 spaces of
target through their next actions.
This skill can only be equipped by its original unit.

Atk/Res Solo 3
If unit is not adjacent to an ally, grants
Atk/Res+6 during combat.

Def Ploy 3
At start of turn, inflicts Def-5 on foes in cardinal
directions with Res < unit’s Res through their next
actions.

"If you find yourself too busy, please allow me to share in your burden. I'm more than used to all sorts of tasks. To be honest, I never feel quite right unless my hands are busy with some chore."


A thief for the Dawn Brigade. He generally
shows little interest in others but tends to be
overprotective of his Micaiah, who's like a sister
to him. Appears in Fire Emblem: Radiant Dawn.

Peshkatz
Mt: 14 Range: 2
After combat, if unit attacked, inflicts Atk/
Spd/Def/Res-4 on target and foes within 2
spaces of target through their next actions,
and grants Atk/Spd/Def/Res+4 to unit and
allies within 2 spaces for 1 turn.
This skill can only be equipped by its original unit.

"No matter where I end up, no matter who I'm with...it won't change who I am or what I have to do. It doesn't change what matters to me, either."