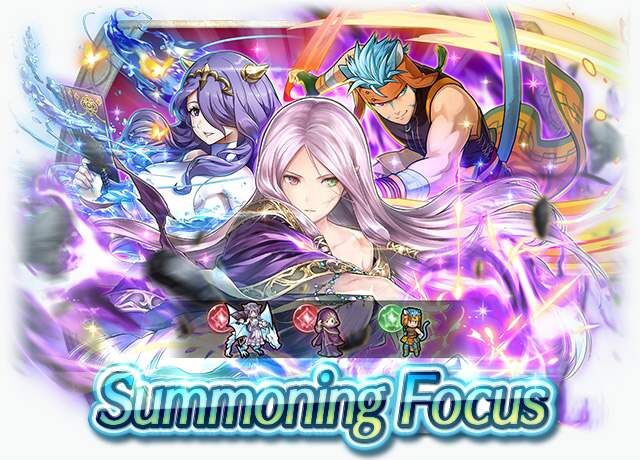 Three Heroes with Goad and Ward skills are available as part of a 5★ summoning focus!

Heroes with Goad and Ward skills grant +4 to the stats of allies of certain types within 2 spaces during combat.

Note: This summoning event incorrectly displays as Focus: With Resonance: Shields on the summon screen. We thank you for your understanding.

Note: This summoning event incorrectly displays as Focus: With Resonance: Shields on the summon screen. We thank you for your understanding.


Transformed into a Demon Dragon and sealed
during the Scouring. She was awoken by Zephiel
and serves him so he may realize his ambition.
Appears in Fire Emblem: The Binding Blade.

Demonic Breath
Mt: 16 Range: 1
Grants Def+3. Effective against armored
foes. At start of combat, if a negative status
effect is active on unit, or if unit's HP < 100%,
neutralizes penalties on unit and grants
Atk/Spd/Def/Res+4 during combat. If foe's
Range = 2, calculates damage using the
lower of foe's Def and Res.
This skill can only be equipped by its original unit.

Bonfire
Cooldown: 3
Boosts damage by 50% of unit's Def.
Cannot use:

Ward Dragons
Grants Def/Res+4 to dragon allies within
2 spaces during combat.
Cannot use:

"I heard His Highness Zephiel so clearly. The world was overrun with vermin. I was to cleanse it."

The eldest princess of another Nohr. A demure
and caring older sister to young Azura. Appears
in Fire Emblem Fates.

Book of Dreams
Mt: 14 Range: 2
Grants Atk+3. If unit is adjacent to an ally,
inflicts Atk/Spd/Def/Res-4 on foe during
combat.
This skill can only be equipped by its original unit.

Atk/Res Bond 3
If unit is adjacent to an ally, grants
Atk/Res+5 during combat.

Atk/Res Link 3
If a movement Assist skill (like Reposition,
Shove, Pivot, etc.) is used by unit or targets
unit, grants Atk/Res+6 to unit and target ally
or unit and targeting ally for 1 turn.
Cannot use:

Goad Fliers
Grants Atk/Spd+4 to flying allies within 2 spaces
during combat.
Cannot use:

"An unquiet heart leads to a life of dissonance. Let us be painstaking and conscientious about how we live."


A cat warrior from Gallia, the home of the beast
tribe of laguz. Though young, his king trusts him
deeply. Considered the right hand of the future
king. Appears in Fire Emblem: Radiant Dawn.

Covert Cat Fang
Mt: 14 Range: 1
Grants Def+3. If unit is within 2 spaces of an
ally, grants Atk/Def+3 to unit and allies within
2 spaces of unit during combat. At start of turn,
if unit is adjacent to only beast or dragon allies
or if unit is not adjacent to any ally, unit
transforms (otherwise, unit reverts). If unit
transforms, grants Atk+2, and if unit initiates
combat, inflicts Atk/Def-4 on foe during
combat and foe cannot make a follow-up
attack.
This skill can only be equipped by its original unit.

Chill Atk 3
At start of turn, inflicts Atk-7 on foe on the
enemy team with the highest Atk through its
next action.

Ward Beasts
Grants Def/Res+4 to beast allies within 2
spaces during combat.
Cannot use:

"There's a beorc in my world who's a little bit...different. Nice guy. Wonder if there's anybody like that here."

Be sure to build a team that makes good use of your Heroes' skills!