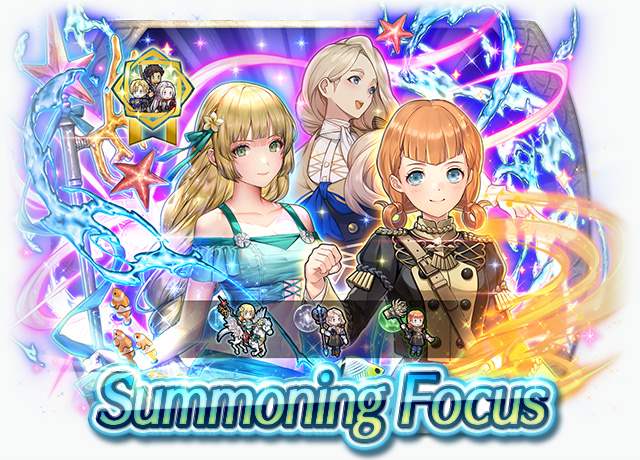 To celebrate the release of the Fire Emblem Warriors: Three Hopes game, we're holding a series of summoning events featuring 5★ focus Heroes from Fire Emblem: Three Houses! All players can summon a free 5★ focus Hero of their choice after summoning 40 times on these events!

Your first summon in these events won't cost any Orbs!


• Heroes might have already learned some skills based on their ★ rating when they joined your team.
About the Free 5★ Summon and Celestial Stones
・ When you finish a summoning session after having summoned a total of 40 or more times in this summoning event, you will be able to choose one 5★ focus Hero to summon for free for your next summon in this event by tapping the Free 5★ Summon button.

Note: Ingrid: Solstice Knight is scheduled to appear in a summoning event in July as well.


Daughter of House Galatea of the Holy Kingdom
of Faerghus. Her summer outfit does nothing to
dull her trademark diligence in any way. Appears
in Fire Emblem: Three Houses.

Starpoint Lance
Mt: 16 Range: 1
Grants Spd+3. During unit's first combat
in player phase or enemy phase, grants
Atk/Spd/Def/Res+5 to unit and restores
10 HP to unit after combat.
This skill can only be equipped by its original unit.

"I borrowed a book from Askr's library before coming here. It's a pleasure to read while listening to the waves."


Adopted daughter of a merchant family in the
Holy Kingdom of Faerghus. Former nobility with
a gentle, easygoing personality. Appears in Fire
Emblem: Three Houses.

Gravity+
Mt: 10 Range: 2
After combat, if unit attacked, inflicts status
on target and foes within 1 space of target
restricting movement to 1 space through
their next actions.

Imbue
Cooldown: 1
When healing an ally with a staff, restores an
additional 10 HP to target ally.
This skill can only be equipped by staff users.

Odd Res Wave 3
At start of odd-numbered turns, grants Res+6
to unit and adjacent allies for 1 turn. (Bonus
granted to unit even if no allies are adjacent.)

"I know that the goddess is always watching over us. That's why I make sure to pray regularly."


Noblewoman of the Holy Kingdom of Faerghus
and niece to Baron Dominic. Ever the good
student, she can sometimes overdo it. Appears
in Fire Emblem: Three Houses.

Crusher
Mt: 16 Range: 1
Grants Atk+3. Calculates damage using the
lower of foe's Def or Res. If a Rally Assist skill
is used by unit, target can move 1 extra space.
(That turn only. Does not stack. No effect
on cavalry allies with Range = 2.)
This skill can only be equipped by its original unit.

Def/Res Ruse 3
If a Rally Assist skill is used by unit or targets
unit, inflicts Def/Res-5 and【Guard】on
foes in cardinal directions of unit and target
through their next actions.

【Guard】
Inflicts Special cooldown charge -1 on target
per attack during combat through its next action.
(Only highest value applied. Does not stack.)

Atk/Def Gap 3
At start of turn, grants Atk/Def+5 to ally
with the highest Atk+Def total for 1 turn.
(Excludes unit.)

"I've been studying, but there's this passage I'm having trouble with... Would you mind taking a look?"

Mercedes has such a gentle personality. It's so soothing.