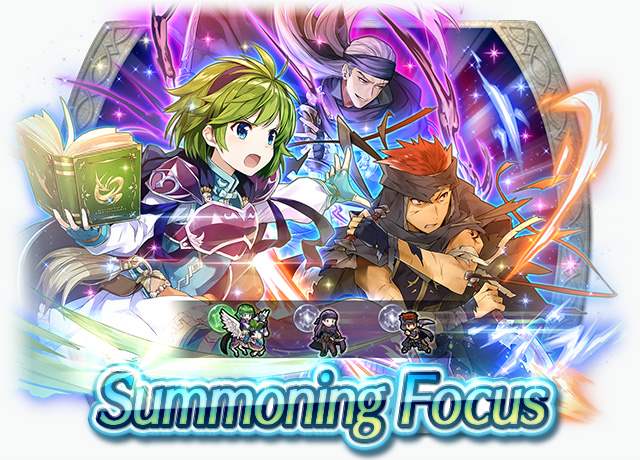 To accompany the start of Bound Hero Battle: Jaffar & Nino, Jaffar: Angel of Death, Nino: Pale Flower, and Legault: The Hurricane will be part of a 5★ summoning focus!


An emotionless member of the Black Fang
assassins. Known as the Angel of Death.
Appears in Fire Emblem: The Blazing Blade.

Deathly Dagger
Mt: 11 Range: 2
After combat, if unit attacked, inflicts Def/Res-7 on
foe through its next action. If unit initiates combat,
deals 7 damage to foe after combat.
This skill can only be equipped by its original unit.

Threaten Spd 3
At start of turn, inflicts Spd-5 on foes within
2 spaces through their next actions.

"We are making conversation, aren't we? All right. The best time to assassinate someone is when the target is eating or sleeping."

A young woman who was part of the assassin
group Black Fang. Now she communes with
a pegasus in order to aid her allies. Appears in
Fire Emblem: The Blazing Blade.

Giga Excalibur
Mt: 14 Range: 2
Grants Spd+3. If unit's Spd > foe's Spd, deals
damage = 70% of difference between stats.
(Maximum bonus of +7 damage. Combos with
Phantom Spd.)
This skill can only be equipped by its original unit.

Aerobatics 3
Unit can move to a space adjacent to any
infantry, armored, or cavalry ally within 2
spaces.
Cannot use:

Spd Smoke 3
Inflicts Spd-7 on foes within 2 spaces of target
through their next actions after combat.
Cannot use:

"It was a little scary at first, flying up so high on a pegasus... But now it's so cool, and wonderful, and strange all at the same time!"


Former member of the Black Fang. He was one
of the founding members and is known as the
"cleaner." Left the group when it lost its way.
Appears in Fire Emblem: The Blazing Blade.

Atk Tactic 3
At start of turn, grants Atk+6 to allies within 2
spaces for 1 turn. Granted only if number of
that ally's movement type on current team
≤ 2.

"You're hanging your hopes on me? I'll have to get to work."

All of these Heroes have connections to the Black Fang!