Enjoy these advanced battles that combine brains and brawn through use of the veto rule!

More >
Summoner Duels S is an event in which you can battle to earn Glory using the same basic rules as Summoner Duels. Stamina won't be consumed in this event, and you can continue to battle until you lose three times. Use the unique veto rule to deepen your strategy!

A total of three Legendary and/or Mythic Heroes will be set as bonus allies each season.

If you have a bonus ally in your team, you can reduce the amount of Glory lost when you lose a battle by 40. Plus, bonus allies negate the first loss you suffer each season, so you can battle until you've lost four times.

Notes:
・ If you have a bonus Hero somewhere in your regiment, the above effects are active even if you dispatch a team without the bonus Hero in it.
・ This effect is only applied once, even if you have more than one bonus ally in your team.

To start playing Summoner Duels S, first you need to form a regiment made up of four teams, each consisting of five Heroes—that's 20 Heroes in all! Keep in mind that you can only battle using one of the teams in your regiment, so you'll want to make each team as strong as you can rather than focusing on a single team. 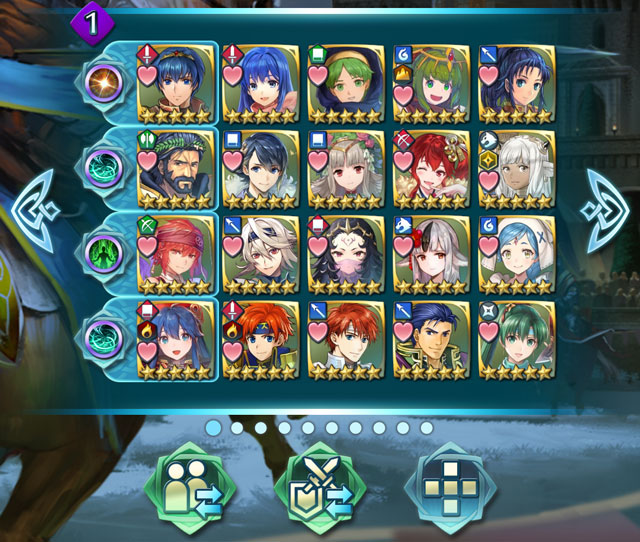 You can edit these teams on the main menu for Summoner Duels S, or from the Edit Special Teams screen in the Allies menu.

There is a special rule in Summoner Duels S that allows you to veto your opponent's teams. After being matched up with an opponent, you choose which team to use in the match by following these steps.

1. Select Teams to Veto
Choose two of your opponent's four teams to veto. The two teams you veto cannot be used in the match. You cannot view the opponent teams' stats or Captain Skills during this step.

2. Choose Your Team
After both players have vetoed, you and your opponent choose one of the two remaining teams left in your regiments to place on the field.

The time limit for both steps 1 and 2 is 30 seconds. If the time limit is exceeded, teams will be automatically selected and combat will begin.

You have to predict which of your teams will be vetoed while also choosing which of your foe's teams to drop... I hope you're good at reading your opponent!

You can earn Glory when you are victorious in a match, but you will lose Glory when you lose a match. You will be able to earn rewards at the end of the season based on the amount of Glory you have earned.

Note: You do not lose Glory when you lose a battle while you are at Tier 1.

In Summoner Duels S, Tiers 4, 7, 10, and 13 will act as thresholds, and your ranking will not drop below those Tiers once you reach them. Your Tier is maintained across seasons.

Each Tier has a different title, such as Beginner C, and you can check your title on the main screen of Summoner Duels S.

Everyone will begin the next season with a set amount of Glory based on their Tier at the end of this season.

You can earn Divine Codes (Part 3) and Dragonflowers depending on your Tier at the end of the season.

You can earn rewards such as Divine Codes (Part 3), Dragonflowers, Hero Feathers, and more based on how much Glory you have in relation to other players.

Notes:
・ This event can only be played if you have earned the Fighter Badge. You do not need to equip it.


・ If you try to enter Summoner Duels S without having earned a Fighter Badge, a confirmation dialogue will be displayed, and you will be redirected to Summoner Duels in the Coliseum.