Summoning Heroes is one of the key aspects of Fire Emblem Heroes. To obtain more heroes to use in combat, they must be either summoned or received as rewards.

To obtain heroes, a player must first select a focus from which to summon. These focuses typically feature three or four different five-star characters and are often categorized by common skills or game origins. Featured heroes have increased drop rates, normally starting at 3%. Legendary Hero focuses are the exception where twelve heroes receive a base drop rate of 8%, though no other five-star heroes can be summoned.

The initial cost for summoning is five orbs. Once paid, players are brought to a screen with five randomly selected colored stones. It is possible that all five stones have the same color. The player can select any one stone as their first summon. 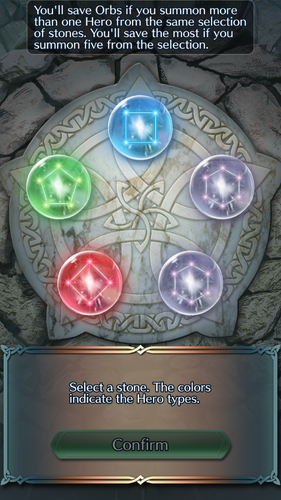 A total of 20 Orbs allows five summons - summoning any less than five heroes in one session increases the orb/hero cost.

In order to enter the summon screen, the player must first pay 5 orbs or none if it is their first summon for that summoning focus. Once the entry fee has been paid, 5 randomly generated color summoning stones will be selected. The player must then choose one stone to summon from. Any consecutive summons in the same session will be discounted. Five summons in the same session will spend 20 orbs while summoning individually will take 25. After the first selection the player can exit to try again if the color for the character they want doesn't appear. However this means they will not be able to take advantage of the discounted price.

Heroes do not have individual drop rates. When a hero is rolled, the rarity of the drop is selected first. Once the rarity is selected, it will randomly choose any character in the rarity. This gives every Hero in a given rarity the same chance to drop. A Summoning Focus may give a 5-Star Focus rate to Heroes already available at different rarities. This will give the Focus Heroes a better chance to drop as they will have multiple chances to be selected.

The procedure followed by the game to form a summoning session can be summarized step-by-step:

During a focus summoning event :

Different colors of orb appear at different rates because there are unequal numbers of units in each color. Different Summoning Focuses will also have different unit representation. For example, if a Summoning Focus has no colorless 5-Star Focus units, the chance of summoning a 5-Star colorless character will be reduced because the 3% Focus chance will not produce any colorless orbs. In the Brave Heroes summoning focus, the 5-Star Focus rarity did not skew the orb distribution because there was one Focus unit of each color. The chance of an orb being a certain color under this focus was as follows:

A sample calculation detailing the 3.95% chance for a green orb to contain

Ike: Brave Mercenary can be found below.

As of the Brave Heroes focus on August 31, 2017, the unit distribution breaks down as such:

See Summonable Heroes for tables on which units are currently available in the pool (adjust for newly added heroes who do not appear on the chosen summoning focus, such as heroes not yet added to the 5

Using P(event) to mean the probability of that event happening, it follows that:

Given that the orb is already green because the player is chasing Ike: Brave Mercenary,

Similar calculations can be done for the other Focus units.

The tables below shows some statistics for the current summoning pool. Calculations are done using these appearance rates:

Percentages are rounded. These tables assume the distribution of Focus Heroes is 1 for each color, the results may vary depending on the color ratio of focus units.

The meaning of each tab is explained: