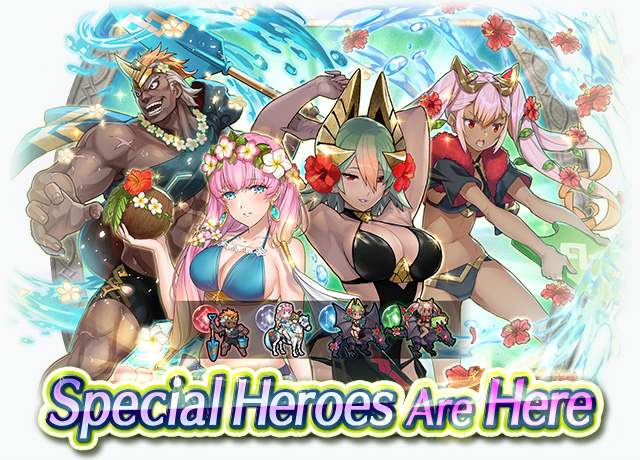 Four Special Heroes trying to keep their cool under a scorching summer sun are back! You can get these Heroes while they're available as part of this 5★ Special Hero revival summoning focus!


• Appearance rates from previous summoning events with the same name will not be carried over to this event.
• Heroes with different illustrations and epithets are treated as different Heroes even if they are the same character. As such, you cannot use them with Merge Allies.
• To view summoning details, you can tap on List of Heroes at the bottom of the related notification message or tap on Appearance Rates in the Summon menu.

Note: Laegjarn: Burning Sun is scheduled to appear in a summoning event in August as well.


The second princess of Múspell, the Kingdom
of Flame. She's begun to practice swimming.

Buoyboard+
Mt: 12 Range: 2
If a bonus granted by a skill like Rally or Hone
is active on unit, grants Atk/Res+4 during
combat.

Def/Res Link 3
If a movement Assist skill (like Reposition,
Shove, Pivot, etc.) is used by unit or targets
unit, grants Def/Res+6 to unit and target ally
or unit and targeting ally for 1 turn.
Cannot use:

Odd Atk Wave 3
At start of odd-numbered turns, grants Atk+6
to unit and adjacent allies for 1 turn. (Bonus
granted to unit even if no allies are adjacent.)

"I've seen others training by trying to smash watermelons... Such training is new to me. I must try it."


The eldest princess of Múspell, the Flame
Kingdom. In her swimsuit, she braves the
red-hot sun.

Worldsea Wave
Mt: 14 Range: 2
Grants Spd+3. If unit's HP ≥ 50% and unit
initiates combat, unit can make a follow-up
attack before foe can counterattack.
This skill can only be equipped by its original unit.

Flier Formation 3
Unit can move to a space adjacent to a flying ally
within 2 spaces.
Cannot use:

Hone Fliers
At start of turn, grants Atk/Spd+6 to adjacent
flying allies for 1 turn.
Cannot use:

"Might I bother you to apply some sunscreen to my back? There are some spots I'm unable to reach..."


The eldest princess of Nifl. Her gentle demeanor
seems to encircle the beach itself in a loving
embrace.

Tropical Treats+
Mt: 12 Range: 2
If a bonus granted by a skill like Rally or Hone
is active on unit, grants Atk/Res+4 during
combat.
Effect:【Dagger ７】

Disarm Trap 3
While attacking in Aether Raids, if unit ends
movement on a space with a Bolt Trap or a
Heavy Trap, cancels trap's effect.
Cannot use:

"My home is a land of perpetual snow. A place like this, where summer lasts forever...it's all so new to me..."


Rough and tumble general of Múspell, the
Kingdom of Flame. Finds the hot beach
refreshing compared to his home.

Sandfort Spade+
Mt: 14 Range: 1
If a bonus granted by a skill like Rally or Hone
is active on unit, grants Atk/Def+4 during
combat.

R Duel Infantry 3
Grants HP+5. If unit is 5★ and level 40 and
unit's stats total less than 170, treats unit's
stats as 170 in modes like Arena.
(Higher-scoring opponents will appear.
Stat total calculation excludes any values
added by merges and skills.)
Cannot use:

Panic Ploy 3
At start of turn, converts bonuses on foes in
cardinal directions with HP < unit's HP into
penalties through their next actions.

"You call this heat? Pathetic. Múspell winters are hotter than this."