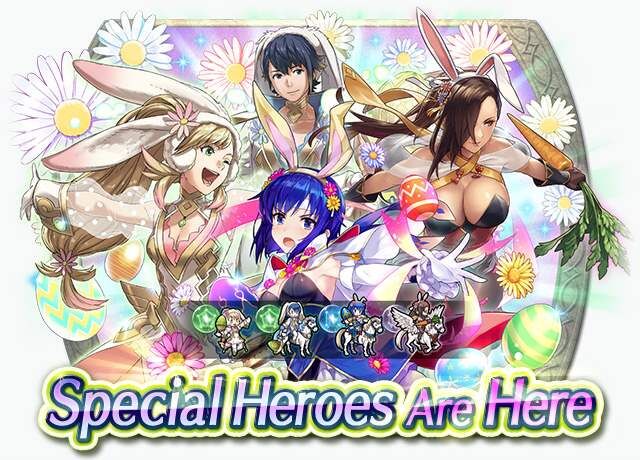 Special Heroes are back to celebrate the spring festival, and you can pick them up while they're available as part of this 5★ summoning focus!


• Appearance rates from previous summoning events with the same name will not be carried over to this event.
• Heroes with different illustrations and epithets are treated as different Heroes even if they are the same character. As such, you cannot use them with Merge Allies.
• To view summoning details, you can tap on List of Heroes at the bottom of the related notification message or tap on Appearance Rates in the Summon menu.

A prince of Askr who's kind and serious.
He's taking part in the spring festival as a
member of the Order of Heroes.

Def Smoke 3
Inflicts Def-7 on foes within 2 spaces of target
through their next actions after combat.
Cannot use:

"My father is stern and very serious... I think seeing me in this getup would probably make him faint."

Princess of Askr and Alfonse's younger sister.
She cajoled her brother into participating
in the Spring Festival with her.

Muninn's Egg
Mt: 14 Range: 2
Grants Res+3. At start of turn, if unit's
HP ≥ 50%, inflicts Atk/Res-5 on foe
on the enemy team with the lowest Spd
through its next action.
This skill can only be equipped by its original unit.

Live for Bounty
If unit survives, get 1.5x shards/crystals from a
Training Tower map. (Only highest value applied.
Does not stack.)

Res Tactic 3
At start of turn, grants Res+6 to allies within 2
spaces for 1 turn. Granted only if number of
that ally's movement type on current team
≤ 2.

"My mother loves festivals. I'm sure she'd be delighted if I dropped by to say hello dressed like this!"

Middle of three sisters who are pegasus knights
for Macedon. She takes her duty to participate
in the Spring Festival seriously. Appears in Fire
Emblem: Mystery of the Emblem.

Huginn's Egg
Mt: 14 Range: 2
Grants Res+3. At start of turn, if unit's
HP ≥ 50%, inflicts Atk/Def-5 on foe
on the enemy team with the lowest Res
through its next action.
This skill can only be equipped by its original unit.

Chill Res 3
At start of turn, inflicts Res-7 on foe
on the enemy team with the highest
Res through its next action.

Drive Spd 2
Grants Spd+3 to allies within 2 spaces during
combat.

"I have never really had the chance to pause and enjoy the changing of the seasons before... Spring really is lovely, isn't it?"

One of Ryoma's retainers, and a ninja of Hoshido.
She was given the mission to participate in the
Spring Festival, and she's fulfilling that duty.
Appears in Fire Emblem Fates.

Lethal Carrot+
Mt: 12 Range: 2
Deals +10 damage when Special triggers. After
combat, if unit attacked, inflicts Def/Res-7 on
target and foes within 2 spaces of target
through their next actions.

Spd/Res Bond 3
If unit is adjacent to an ally, grants Spd/Res+5
during combat.

Live for Honor
If unit survives, get 1.5x badges from a Training
Tower map. (Only highest value applied. Does
not stack.)

Goad Fliers
Grants Atk/Spd+4 to flying allies within 2 spaces
during combat.
Cannot use:

"For a ninja, stealth is essential. But clothing like this... It does not help."

Try not to get hit by Kagero's Lethal Carrot attack!