Pawns of Loki Is Here!

Pawns of Loki, an event in which players battle using Forma, special units made in the image of Heroes, that are specific to this mode, begins now!

Devise strategies with your units to challenge Loki in her game of the gods!

■ About Pawns of Loki

Pawns of Loki is an event held in a world controlled by Loki where you can participate in the game of the gods. Use Forma, special units made in the image of Heroes, that you've recruited into your brigade or from your friends' Heroes. Achieve a high score to reach a high Tier and earn rewards!

The battle is fought automatically... That means the key to winning lies in your strategy!

Tap to learn more about brigades.

You can form a brigade with a maximum of 20 Heroes in the Rival Domains and Grand Conquest menus. You can also select the Friends' Allies button to add Heroes from your Friend List into your brigade as well.

・ From within the Rival Domains or Grand Conquests screen, tap Edit Brigades once to unlock the Edit Brigades option in Edit Special Teams on the Allies menu.
・ The Hero who will be sent to your friends is the Hero in the leftmost position of Team 1.
・ Any empty slots in your brigade will automatically be filled with level-40 reinforcements.

Brigade Restrictions:
・ You can include only one ally who can use Sing or Dance in your brigade.


・ Duplicate Heroes are not allowed.

Each round will be held over a 2-day period.


There's a special web page explaining the Pawns of Loki event. A video featuring Loki explaining some tips and strategies is available as well. Be sure to give it a watch!

Loki can be pretty scary...but I'm looking forward to it anyway!

■ Steps for Playing the Event

1. Draft Forma units in the Setup Phase.
2. Automatically battle foes in the Battle Phase.
3. Your score is calculated based on the results of the battle and type bonuses!

Steps 1 through 3 are repeated for nine turns. After all turns have taken place, your total score will be recorded.

This is the phase where you gather the Forma you will use in the Battle Phase.

Every turn, you will receive an allotment of

war funds equal to twice the turn number. Use these war funds to draft Forma from the shop. The Forma available in the shop are selected at random from the Heroes in your brigade. Their levels are also determined at random, and the higher the Forma's level, the more war funds it costs to draft them. 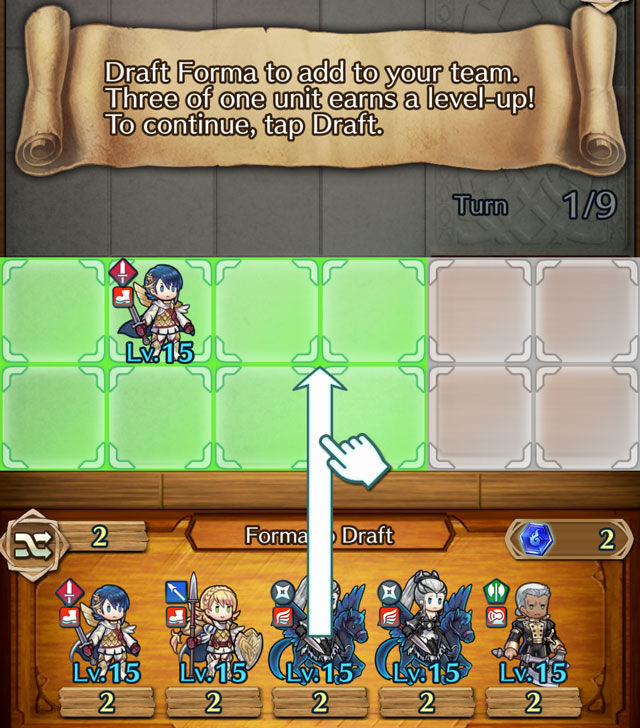 ・ You draft Forma by moving them from the row of Forma at the bottom of the screen to the team window in the center of the screen.
・ You can discharge Forma you don't need and receive war funds in return by moving them from your team to the bottom of the screen. (You will only receive a full refund the first time you discharge a Forma each turn. For each subsequent discharge on the same turn, you will get half of the war funds back.)
・ You can tap the button to the top left of your draftable Forma to refresh your selection. (Only the first refresh each turn is free. Each subsequent refresh on the same turn will cost war funds.)
・ The green window shows Forma that will participate in the battle. The gray window shows reserve Forma that will not participate in the battle.

You will still have access to any remaining war funds in the next Setup Phase.

Draft three of the same Forma onto your team to create a Trio Forma. The three Forma will merge into one and level up 10 levels. 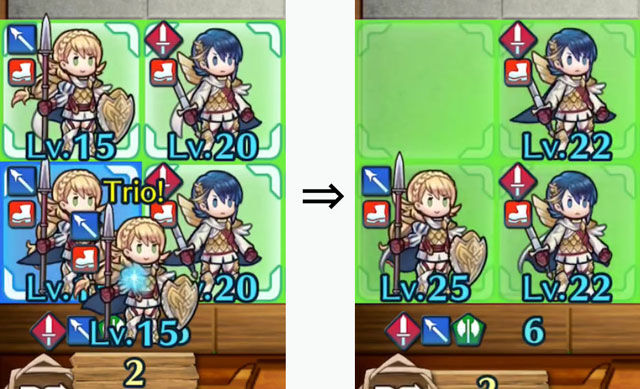 Forma that become a Trio Forma will cost two additional war funds to draft. Also, all ally Forma and any Forma available in the shop when the Trio Forma is triggered will level up two levels.

In this phase, you compete in battles and aim for a high score. In turns 1 through 3 you battle Emblian soldiers, and from turn 4 onward, teams created by other players appear as enemies. 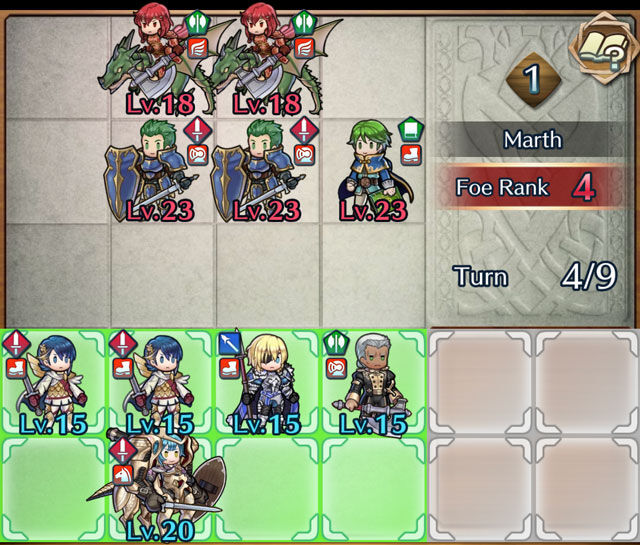 Battles begin after changes to unit stats from combos and skill effects are applied.

When a certain combination of Forma are in your active team at the start of the Battle Phase, combos are triggered! During that turn and only that turn, all Forma in your team have their HP, Atk, Spd, Def, and Res increased. What's more, the effects of each combo stack!


Tap to learn more about Weapon-Type Combos.
When three or more of the same weapon types are present, such as three

, a combo is triggered. When the same weapon type is present in different colors, such as


The following weapons are considered to be the same weapon type:

are present. There is one color, so a bonus of +2 is granted to every stat.

are present. There are two colors, so a bonus of +4 is granted to every stat.

are present. There are three colors, so a bonus of +6 is granted to every stat.

are present. There are four colors, so a bonus of +8 is granted to every stat.
Tap to learn more about Move-Type Mix Combos.
When three or more different movement types from the following are present, a combo is triggered:


When three different movement types, such as

are present, a bonus of +4 is granted to every stat.

When four different movement types, such as

are present, a bonus of +6 is granted to every stat.
Tap to learn more about Move-Type Pair Combos.
When there are two or more pairs of different movement types present, a combo is triggered.


Note: This combo takes into account a maximum of three pairs of different movement types.

When there are two pairs of different movement types, such as

When there are three pairs of different movement types, such as


Tap to learn more about levels.
In Pawns of Loki, the level cap for Forma is 99. HP, Atk, Spd, Def, and Res also increase to a maximum of 99. A Forma's level is determined randomly when it appears in the shop, and only Trio effects can increase it.

Note: Level 99 Forma can still trigger a Trio. (Your ally Forma and the Forma that appear in the shop at the time will all have their level increased by 2.)
Tap to learn more about Forma rarity and skills.
A Forma's rarity as well as their skills and Sacred Seals will be determined based on the Hero from which the Forma is created and the level the Forma has reached.

・ Level 30 and above
5★
They will be equipped with the weapon and Special skills and A/B/C skills that the Hero they are created from has equipped. They will also have Sacred Seals equipped without any SP cost limitations.


The number of Dragonflowers used will be applied as-is.
Tap to learn more about Ally Support and Summoner Support.
Both will be in effect for your team.

About the Battle Phase

Battle Phase progression:
In the Battle Phase, all battles take place automatically. Units will attack the enemies closest to them, prioritizing targets in the below order, until all enemy or ally units can no longer act.
・ Forma in the front > Forma in the back
・ Forma with a high level
・ Forma with high Spd
・ Your Forma > Enemy's Forma
・ Forma on the left side of the battlefield screen

When a Forma attacks an enemy, they will move to the space in front of the enemy they are attacking as necessary.

Characteristics of the Battle Phase:
There are some aspects of Pawns of Loki battles that are different from standard battles.

・ Forma actions
Forma will only attack enemies and will not take other actions.

・ Skills
The below skills will not be activated.


However, skills triggered by movement-altering skills, such as Gravity or Armor March, will still be activated.

Examples: Persecution Bow (movement penalty from Gravity) or Garm (movement bonus from Armor March)
Other skills that do not activate during combat
Examples: Live for Honor and Disarm Trap

Skills that activate at the beginning of the turn, such as Hone Atk, will activate after the Battle Phase combos are applied, according to how units are positioned on the board.

Skills that activate during combat have their effects calculated based on the Forma's position when the combat takes place, after having completed their movement.

Also, Save skills equipped by enemies will not activate.

On each turn after the end of the Battle Phase, your score will go up based on the results of that turn.

The difference between your team's HP and the enemy team's HP will always be at least zero. Don't worry—you can't lose points here!

If there are Forma with the bonus weapon type on your team on turn four or beyond, a bonus (up to a maximum of 100) will be added to your score based on their number.

Example of teams for which a bonus of 100 (the maximum) will be added:

The bonus weapon type changes with each battle, so don't forget to reform the brigade if necessary!

Don't get discouraged—use the extra war funds to clinch a victory next turn!

You can receive Orbs, Dragonflowers, Divine Codes (Ephemera), and more based on how many points you earn (how high your score goes).

You can earn three times as many points during the first game on any given day, so be sure to play each day!

If you attain a high score relative to other players, you will move up a Tier in Pawns of Loki. When you move up a Tier, you can earn Orbs and Hero Feathers. Tier rewards are distributed when the event ends.

Your Tier will carry over to the next Pawns of Loki event. You can play as much as you like during the event, so work hard to raise your Tier and aim for the prizes at the top of the Tier rewards!

We're fighting in a world where the rules are set by Loki... We must be prepared for anything!