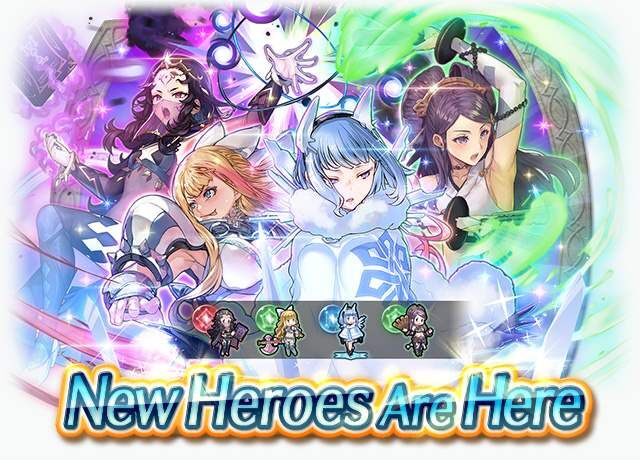 New Heroes from the Fire Emblem Fates games and Nifl: God of Ice, the god of Nifl in Fire Emblem Heroes, are available as part of a 5★ summoning focus!

Notes:
・ When you finish a summoning session after having summoned a total of 40 or more times in this summoning event, you will be able to choose one 5★ focus Hero to summon for free for your next summon by tapping the Free 5★ Summon button. You will also receive a 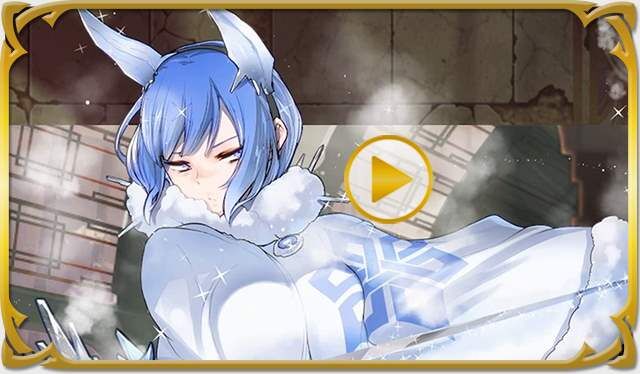 Notes:
・ Benny: Sensitive Soul will appear as a 3★ and 4★ Hero starting with this summoning event.
・ This summoning event includes a 4★ focus category with an initial appearance rate of 3%. Orochi: Merry Diviner is also available as part of this 4★ focus category. Your 5★ and 5★ focus appearance rates will not reset if you summon this Hero at 4★ rarity.


The god of Nifl, the Kingdom of Ice. Her frozen
personality is as cold and distant as her realm.

Frostbite Breath
Mt: 16 Range: 1
Grants Spd+3. At start of combat, if unit's
HP ≥ 25%, inflicts Atk/Spd/Def/Res-5 on foe
during combat, and also, after combat, if unit
attacked, inflicts status preventing
counterattacks on target and foes within
2 spaces of target through their next actions.
If foe's Range = 2, calculates damage using the
lower of foe's Def or Res.
This skill can only be equipped by its original unit.

Lull Atk/Spd 3
Inflicts Atk/Spd-3 on foe and neutralizes foe's
bonuses to Atk/Spd (from skills like Fortify,
Rally, etc.) during combat.
Cannot use:

"Nifl is a land of ice and snow. There, all is silent, as if time itself has frozen. That is how I prefer it."


A Nohrian border guard who dreams of
rising above the class of her middling birth.
Appears in Fire Emblem Fates.

Fair-Fury Axe
Mt: 16 Range: 1
Accelerates Special trigger (cooldown count-1).
If unit initiates combat or is within 2 spaces of
an ally, deals damage = 15% of unit's Atk and
grants Atk/Spd+6 to unit during combat.
This skill can only be equipped by its original unit.

Frenzy 3
If unit's Spd > foe's Spd, reduces damage from
attacks during combat and from area-of-effect
Specials (excluding Røkkr area-of-effect
Specials) by percentage = difference between
stats × 4 (max 40%). If unit's HP ≤ 50% and
unit initiates combat, unit can make a follow-up
attack before foe can counterattack.
Cannot use:

"You'd like me to defend the castle? Of course! If something happens, I'll just smash—I mean, I'll call for help!"


A mage who once grew so overwhelmed by her
own power, she cast a forbidden spell, inflicting
unspeakable loss. Appears in Fire Emblem Fates.

Ginnungagap
Mt: 14 Range: 2
Grants Spd+3. At start of combat, if unit's
HP ≥ 25%, grants Atk/Spd+6 to unit during
combat, and also, if unit initiates combat or
foe initiates combat and uses magic or staff,
reduces damage from foe's first attack by 40%
and boosts unit's next attack by total damage
reduced (by any source, including other skills).
Resets at end of combat.
This skill can only be equipped by its original unit.

Luna
Cooldown: 3
Treats foe’s Def/Res as if reduced by 50% during
combat.
Cannot use:

Spd/Res Solo 4
If unit is not adjacent to an ally, grants
Spd/Res+7 during combat.

"My name is Nyx. Let me be frank: I'm best left alone. Not you nor anyone else can understand my plight."


A Hoshidan diviner who was a frequent visitor
at the castle from a young age, quickly growing
familiar with the royal family. Appears in Fire
Emblem Fates.

Tiger Spirit
Mt: 14 Range: 2
Grants Res+3. At start of combat, if unit's
HP ≥ 25%, grants Atk/Res+6 to unit during
combat, and also, after combat, if unit attacked,
inflicts【Panic】on target and foes within
2 spaces of target.

【Panic】
Converts bonuses on target into penalties
through its next action.

Atk/Res Link 3
If a movement Assist skill (like Reposition,
Shove, Pivot, etc.) is used by unit or targets
unit, grants Atk/Res+6 to unit and target ally
or unit and targeting ally for 1 turn.
Cannot use:

"Care to hear a secret? I'm actually a magical cat! ...Wait—you didn't actually believe that, did you?"

There's no denying she's a god that embodies Nifl, the Kingdom of Ice...brrr...