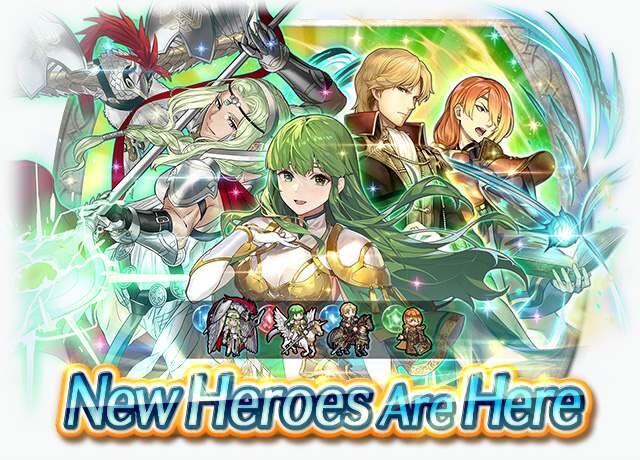 New Heroes from Fire Emblem Echoes: Shadows of Valentia and Nótt: Moon's Elegance, a Mythic Hero from Book V of Fire Emblem Heroes, are available as part of a 5★ summoning focus!

Notes:
・ Nótt: Moon's Elegance will also appear in a Legendary Hero summoning event scheduled for the end of this month.
・ When you finish a summoning session after having summoned a total of 40 or more times in this summoning event, you will be able to choose one 5★ focus Hero to summon for free for your next summon by tapping the Free 5★ Summon button. You will also receive a 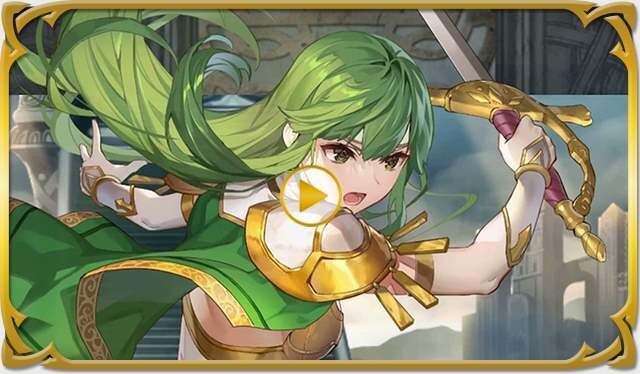 
The crown princess of Jötunheimr and twin
sister of Dagr. Appreciates the finer things
in life, prizing beauty and elegance.

Grants allies this Mythic Effect during Dark
season, if the Dark blessing has been conferred
and if this unit enters battle in Aether Raids with
them: Dark-blessed allies decrease the
Aetheric Lift lost for defense failures during
Dark season. (This decrease is limited to the
number of Mythic Heroes (Max: 2) × the number
of Heroes with the blessing conferred × 5.)

During Dark season, this Mythic Hero will
decrease Aetheric Lift loss for defense
failures depending on number of merges. (This
decrease is limited to the number of times the
units have been merged × 1 (Max: 20).)

Hrímfaxi
Mt: 16 Range: 1
Grants Spd+3. At start of combat, if unit's
HP ≥ 25%, grants Atk/Spd/Def/Res+5 and
bonus to Atk/Spd/Def/Res during combat =
current bonus on each of unit's stats for 1 turn.
(Example: if unit has +7 bonus to Atk, grants
Atk+12, for a net bonus of Atk+19.) Calculates
each stat bonus independently.
Effect:【Pathfinder】

【Pathfinder】
When an ally moves through unit's space, that
space is counted as 0 spaces moved instead of
1 space. (Unit's space can be freely added to
ally's normal movement. Applies only to allies
with movement types that allow movement
through unit's space.)

Distant Counter
Unit can counterattack regardless of foe's range.
Cannot use:

Atk/Spd Menace
At start of turn, if unit is within 4 spaces of
a foe, inflicts Atk/Spd-6 on closest foes through
their next actions and grants Atk/Spd+6 to unit
for 1 turn.

"I am Nótt, Jötunheimr's next queen. I hope we can forge friendly relations between our two grand realms."


Pegasus knight from Macedon who ventured
to Valentia in pursuit of her sister. Appears in
Fire Emblem Echoes: Shadows of Valentia.

(Unit moves according to movement type. Once
per turn. Cannot attack or assist. Only highest
value applied. Does not stack. After moving,
if a skill that grants another action would be
triggered (like with Galeforce), Canto will
trigger after the granted action. Unit's base
movement has no effect on movement granted.
Cannot warp (using skills like Wings of Mercy)
a distance greater than ２ space(s).)

Atk/Res Rein 3
Inflicts Atk/Res-4 on foes within 2 spaces
during combat.
Cannot use:

"Est! Hey, Est! That's not my Est, you say, but an Est from another world? Just how many are there?"


General of the Rigelian Empire. Tatiana found
him unconscious, his memory lost. Appears in
Fire Emblem Echoes: Shadows of Valentia.

Holy Gradivus
Mt: 16 Range: 1
Unit can counterattack regardless of foe's range.
At start of combat, if unit's HP ≥ 25%, unit makes
a guaranteed follow-up attack.
This skill can only be equipped by its original unit.

Bonfire
Cooldown: 3
Boosts damage by 50% of unit's Def.
Cannot use:

【Penalty】
All effects that last "on foe through its next
action." Includes penalties inflicted by a skill
like Panic or Threaten and negative status
effects (preventing counterattacks, restricting
movement, or the effects of a skill like
Triangle Adept or Guard).

Lull Atk/Def 3
Inflicts Atk/Def-3 on foe and neutralizes foe's
bonuses to Atk/Def (from skills like Fortify,
Rally, etc.) during combat.
Cannot use:

Def/Res Menace
At start of turn, if unit is within 4 spaces of
a foe, inflicts Def/Res-6 on closest foes through
their next actions and grants Def/Res+6 to unit
for 1 turn.

"I have yet to regain my memories, including my real name... But for now, you may call me Zeke."


A mage and eccentric man of Zofia who excels
in magic but has no friends. Appears in Fire
Emblem Echoes: Shadows of Valentia.

Guard 3
At start of combat, if unit's HP ≥ 80%, inflicts
Special cooldown charge -1 on foe per attack.
(Only highest value applied. Does not stack.)

"Have you seen Delthea? That girl is always up to something. I'll need to set her to rights...again."

Nótt and Dagr are twin sisters, but they have such different personalities!