Edit
This article may need cleanup to meet quality standards.
Please help improve this if you can. The Discussion page may contain suggestions.
Reason: "tone, terminology, pronouns"

You can move a unit around the map by holding and dragging them to the grid position of your choice. You may also tap the unit and tap on a location within the blue squares.

The distance your unit can move as well as the terrain they can move through is determined by their Movement Type which includes:

Each unit also has a set of actions they can do each turn based on their skills. A unit with a weapon might decide to attack that turn, or a unit who only has a healing skill might decide to heal or buff their allies. To initiate a unit's action, drag/tap a unit to the other unit (ally or enemy) you would like to interact with.

After dragging/tapping the unit to start the action, an animation will play displaying your unit's action. If your unit attacks an enemy unit, this screen will also show their reaction (Death if killed, counterattack if still alive). 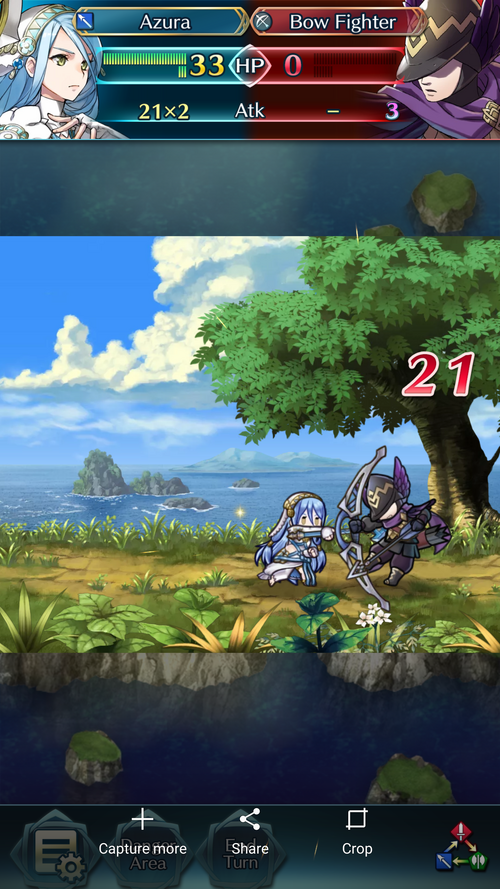 Additionally, these actions also have a set range. For example, archers and mages cannot attack units in spaces adjacent to them. When you select your unit on the map, this range will be denoted by red squares. 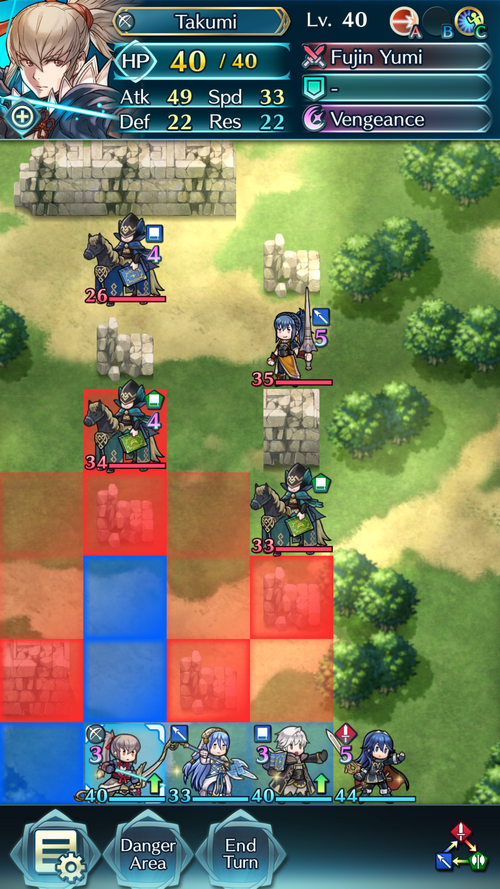 Similarly, you can also view their movement distance and range if you tap their icon. You can also view this by selecting "Danger Area" at the bottom of the map. Utilize this knowledge to successfully position and develop your strategy to beat your enemies! 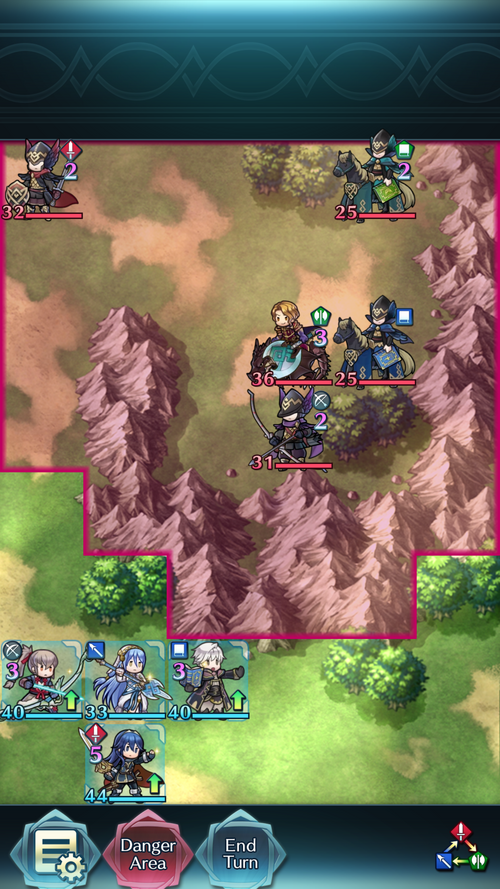 Additionally, enemy units follow certain "rules" to decide where to move and what to attack. These rules may vary map-to-map, but there are a set of guidelines for how enemy units move in general. For more information regarding Enemy AI Mechanics, refer to Enemy AI.

Each map has varying terrain, some of which can be destroyed, others which inhibit movement, or provide bonuses. For example, forests will slow Infantry units while completely blocking Cavalry units. Flying units can move through forest terrain with no problems.

Another example is a rubble of rock blocking your unit's path. Your unit can only pass through the rubble by destroying it via character action. 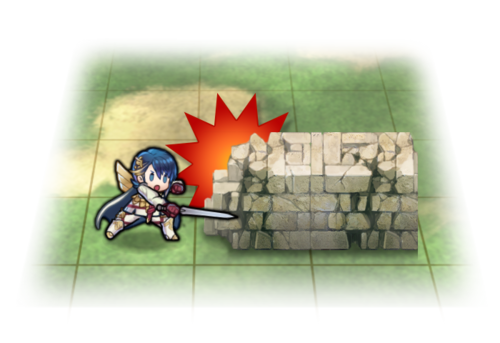 Auto Battle is a feature that can be accessed from the Settings menu in battle. By turning this on, you allow the AI to play for you and automatically control your units.

Swap Spaces is a feature that allows you to swap the starting positions of your units before combat. A unit can swap spaces as long as they didn't take any action (Movement, using an Assist etc.). However, if a unit is in range for an attack, it is possible to check the combat results and plan accordingly.

All weapons will have the following properties to describe them:

In Fire Emblem Heroes, most units wield a weapon of a certain color (red, green, or blue). These colors are utilized in a color weapon triangle where each color is strong against and weak to one of the other colors. 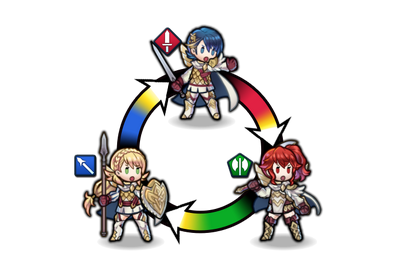 Using a color strong against another color will grant an additional 20% to the Attack stat, while a color weak against another will reduce Attack by 20%, so it is strongly advised to heed the color weapon triangle when engaging in battle against an enemy.

Flying units and staves have the ability to heal allies while only being able to deal halved damage.

Daggers and staves usually serve other purposes other than attack. Daggers deal low damage but inflict debuffs that can serve to greatly lower/hinder enemy stats and other variables, such as movement and abilities. Staves are the only weapon class that have the capability of healing other units' HP, and are usually weak in terms of attack, but with the correct sets can still deal a decent amount of damage, or fixed damage to a group of enemies.

The basic damage calculation formula is

Weapon skills determine the might (Mt) and range (Rng) of a unit's normal attack, they sometimes come with special effects, for example the

Exalted Falchion is effective against

Assist skills are skills that can be used on allies, for example the

Sing skill, which allows an ally to make an additional action. Assist skills can also apply buffs or be used for positioning.

Glacies, adding damage to the unit's next attack, or defensive like

Summoning is the primary way to get new Heroes to add to your team. It costs orbs to perform, and guarantees one to five new Heroes (depending on the amount of Summoning Stones used in one summoning session) with three to five stars of Rarity.

Orbs. After this first stone, however, consecutive Summoning Stones will cost less orbs.

Summoning five Heroes at the same time will cost twenty Orbs, meaning that you get one more Hero than you would have if you summoned each one individually.

The appearance rates can vary between summoning sessions, but the default rates are as follows:

In total, the chance to summon any 5-star Hero is 6.00% by default, although half of that will only be the Heroes displayed for the Summoning Focus you chose.

The Appearance Rates will change slightly after every five summonings that do not result in any 5 Star Heroes. Both the rate for 5 Star (Focus) and 5 Star (General) will increase by 0.25%, subtracting from the 4 and 3 Star categories, for every five such summons. This continues up to 115 summons, where the total Appearance Rate of 5 Star Heroes will be 17.5%. After the 120th consecutive summon without a 5 star Hero, this total rate increases to 100%. When a 5 Star Hero is eventually summoned, the rates will revert to their default after the summoning session.

After the initial five Orbs are spent, Five Summoning Stones will appear, with four different possible colors. The color of the Summoning Stone indicates what kind of unit will be summoned if that stone is picked.

When all five Summoning Stones are used, the summoning session will end. If you desperately want a unit of a specific color, you will have to spend five more Orbs to start a different session if the stone color of the unit you want did not appear, or all stones of that color are used.

Various items and resources can be viewed either at the top of most menu screens (in the case of the Stamina bar, Dueling Swords, Hero Feathers, and Orbs) or in the Inventory menu (found under the Miscellaneous page in the main menu).

Orbs Orbs are the premium currency of Fire Emblem Heroes. To get more orbs, you must either purchase them using real-world money in the store, or earn them in-game through various methods. The simplest way of obtaining Orbs is by completing story maps, with one Orb being awarded for every map cleared on each difficulty level (for a maximum of three Orbs per story map). Orbs can also be gained as a reward for Quests or other events.

Orbs can be used for a variety of things, but the primary use is summoning heroes. It is suggested to wait until you have at least twenty orbs before summoning, as the cost is lower if you summon more than one Hero at the same time.

Stamina In order to play a map, you must use a number of stamina points out of a maximum of 99 points, with the cost varying by map. In general, the stamina cost is approximately equal to half the overall level of a map, with a few exceptions. For special maps, the cost is always 5 for the Normal version and 10 for the Hard version. Arena Duels do not cost any stamina.

Stamina can be restored instantly using a Stamina Potion, which can be bought in the store or obtained as a reward for various Quests or events. Using a potion will add 99 points to the total count, and can temporarily exceed the maximum value, so it is not necessary to wait until Stamina is 0 for the optimal results. Alternatively, Stamina will also refill at a rate of one point every five minutes.

Dueling Swords Instead of a stamina cost, playing a map in the Arena Duels section will cost one Dueling Sword, out of a maximum of three swords. Dueling Swords can be restored instantly using a

Dueling Crest, which can be bought in the store or obtained as a reward for various quests or events. Alternatively, Dueling Swords will automatically refresh every day at 12:00 a.m. Pacific Daylight Time or 3:00 a.m. Eastern Daylight Time.

Hero Feathers Hero Feathers are used to increase the Rarity of a Hero in the Unlock Potential page. They can be obtained by talking to your units on the Home page (when the unit has hearts around them), by receiving greetings from friends once per day, by selling units using the Send Home feature, or as rewards at the end of each season of the Dueling Arena.

Light's Blessings Light's Blessing can be used at any time during a battle to restore all allied units' HP, movement, and Special countdowns. If all of your units are defeated, you will also be prompted to use or purchase a Light's Blessing to continue the battle.

Badges Badges are also used along with Hero Feathers to increase the Rarity of a Hero in the Unlock Potential page, found in the Advanced Growth section of the Allies menu. There are four different colors of badges used for each color of unit (

Transparent) as well as