The battlefield this time is the area surrounding Hoshido from the Fire Emblem Fates games! Hinoka, Sakura, and Takumi are ready to engage in a three-army battle!

Tap Events and then Grand Conquests to pre-register for the event!

More >
■ What Is Grand Conquests?


This is a battle event where three armies fight over territory. Lead a brigade, and conquer as many areas as you can within the time limit! 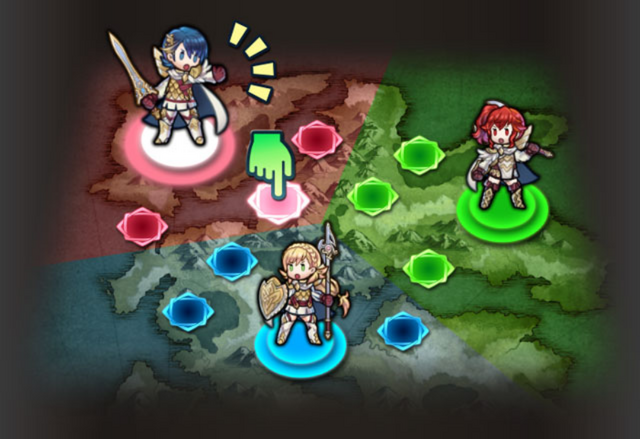 Each battle in Grand Conquests is made up of 11 four-hour rounds. Your goal is to conquer more areas than your opponents' armies within the time limit. You can conquer an area in the following two ways:

During a four-hour round, exceed the opposing armies' scores for an area by 200,000 points or more.

2. Conquer by Taking the Lead

At the end of a round, the army with the most points conquers the area.

Points accrued in that area reflect the battle results of the Grand Conquests participants. Try to pay attention to where your allies are fighting to help you decide which area you should do battle in.

After the 11th round concludes, you will be rewarded with things like Hero Feathers and Arena Medals based on your area score.

Tap the + icon to check the area score for each round! 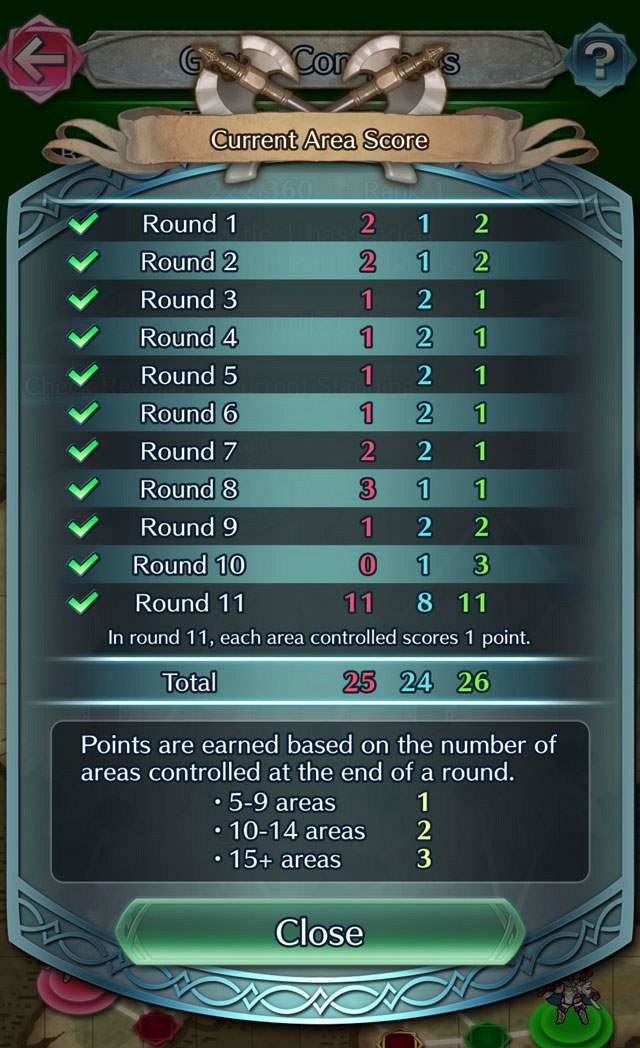 For each of the three battles, you will receive Rank Rewards according to your contribution within your army.

There will be quests running alongside all three battles in an event. Win battles to earn rewards like Orbs, Universal Shards, and Hero Feathers.

Your GC Tier ranking will rise based on the score you accumulate during the event, and you will earn Orbs, Divine Codes (Ephemera), Refining Stones, Sacred Coins, and other rewards. Tier 25 is the top rank!

Battling in the Grand Conquests mode follows the same rules as Rival Domains. You can deploy up to 20 Heroes to battle. Use Edit Special Teams in the Allies menu to create your brigade.

Worried that your Heroes may not be up to the task? Don't be!

・ Ask a friend! If you have friends with Heroes you'd like to use, you can select Friends' Allies to add them to your brigade.
・ Ask an ally! If you don't have many friends, you don't have to choose all 20 Heroes in Edit Brigades. Reinforcements who are fighting in the same army as you will automatically join the fight during battle.


・ The Hero who will be sent to your friends is the Hero in the leftmost position of Team 1.
・ Any empty slots in your brigade will automatically be filled with level 40 reinforcements.

・ You can include only one ally who can use Sing or Dance in your brigade.


・ Duplicate Heroes are not allowed.
■ To Battle!


〇 Select an Area and Deploy Your Brigade

You can deploy into areas that border your army and your opponents' armies. Select an area to check the current battle conditions.

If you aren't sure which area you want to fight in, start with the area with Try this! displayed over the top of it or one with area effects on adjacent territory. If you conquer an area that can affect other areas, it can help your army out. 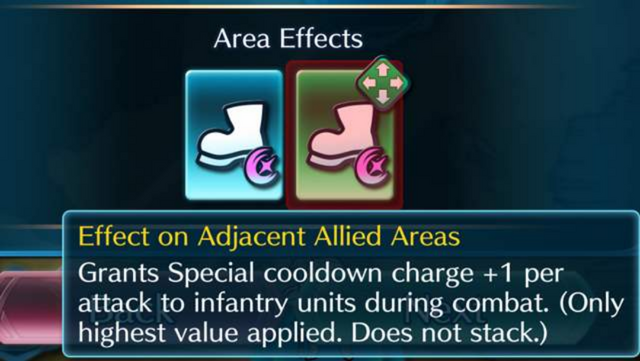 〇 Use Stamina to Battle and Increase Your Score

You use Grand Conquests–specific stamina

to deploy your units.

will recharge once an hour, and you can have up to 8 stamina at any time. And if you use multiple stamina

, you can boost your score by as many stamina as you expend. You can also recover eight stamina

Battles in Grand Conquests use the same rules as Rival Domains. Fighting on a large map, the objective is to capture the enemy's camps and its fortress. There are two ways the battle can end: if one of the fortresses on the map is destroyed or if the 10th turn concludes. These four areas affect your score:


About the Maps
You'll find different features on these 10 × 8 maps than you'll find on normal maps:


For each of the three battles, area effects will grant Heroes with certain movement types some special effects. One example is armored units being able to move an extra space.

Go into battle using units that will benefit from area effects to gain the advantage!

〇 Aim to Raise Your Tier

Build up your score to increase your GC Tier!

You won't just earn rewards—you'll be able to build up the score total in areas where you battle, and surrounding areas as well! If you want to maximize your rewards and help your army, aim to reach GC Tier 25 during the event.

〇 Too Busy to Play? Help Out!

During each round, you have one chance to offer aid to your army. When you tap Help Out! points will be given to the area you support. Even if you don't have time to fight, you can still earn items by helping out, so give it a try!

■ As the Battle Progresses...

Here's what you can do to help your army attain victory in each four-hour round!

When a round ends, your army will conquer an area if they have the most points, so look out for areas that you can help capture or areas that are in danger of being captured.

Areas with a green icon, as shown above, will have a positive effect on other surrounding areas, so look out for them.

The number of defense points an army has at the start of each round is based on the number of areas that army controls. The fewer areas an army controls, the more points they will have. This makes it more difficult for enemies to conquer them.

〇 Check the Number of Troops

The points that each area accrues will be increased depending on the number of players who have participated in battles in the area.

It's easier to earn points with a lot of people in the same area, but if everyone is focusing on only a few areas, you'll be in danger of losing elsewhere! It'll be important to weigh whether it's better to aim for a high score in one area or gain points for your army by fighting in many different areas.

A knockout occurs when the first-place army accumulates at least 200,000 points more than the second-place army in an area.

That area will be conquered immediately, and it may even become possible to attack neighboring areas.

A knockout is extremely strong, but getting 200,000 more points than the other armies is a very high bar to reach. If you concentrate on one area to the exclusion of all else, your other areas may be captured, so be careful!

〇 Two Days until It's Over

When all the rounds are over, your final score will be calculated based on your area score in each round and the number of areas controlled at the end of the final round.

Rewards will be given based on your final score. Don't forget to get them! Your available rewards can be found in Check Rewards.

When everything begins again, the armies will be totally different and the area maps will also change. Evaluate the situation accordingly!