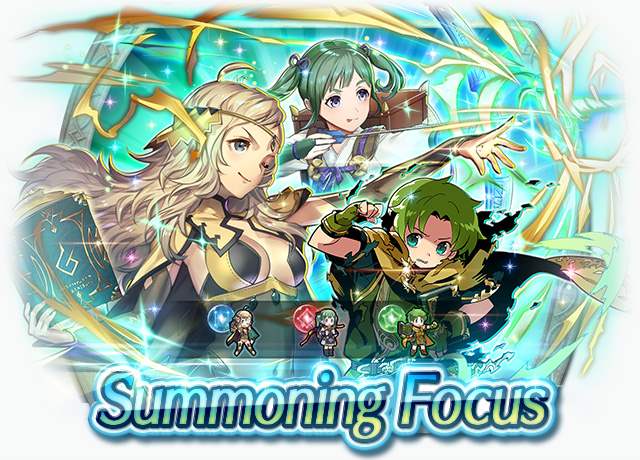 Three Heroes with Rally+ skills are available as part of a 5★ summoning focus!

Heroes with Rally+ skills grant up to +6 to certain stats to a target ally for one turn.


Daughter of the stalwart Hoshidan ninja Kaze.
An expert when it comes to crafting balms and
poultices from medicinal herbs. Appears in Fire
Emblem Fates.

Close Foil
If sword, lance, axe, bow, dagger, or beast foe
initiates combat, grants Atk/Def+5 to unit during
combat and unit can counterattack regardless
of foe's range.
Cannot use:

Chill Atk 3
At start of turn, inflicts Atk-7 on foe on the
enemy team with the highest Atk through its
next action.

"I grew up in the Deeprealms far away from my father. There I studied apothecary so I could help people."

Odin's daughter. A daydreamer who applies a
flair for the dramatic to her magic. Appears in
Fire Emblem Fates.

Missiletainn
Mt: 14 Range: 2
Accelerates Special trigger (cooldown count-1).
At the start of turn 1, grants Special cooldown
count-1 to unit for each magic ally on your
team (including unit).
This skill can only be equipped by its original unit.

Rally Up Atk+
Range: 1
Grants Atk+6 to target ally and allies within
2 spaces of target (excluding unit) for 1 turn.
Cannot use:

Blazing Light
Cooldown: 4
Before combat this unit initiates, foes
in an area near target take damage equal
to 1.5 x (unit's Atk minus foe's Def or Res).
Cannot use:

Chill Res 3
At start of turn, inflicts Res-7 on foe
on the enemy team with the highest
Res through its next action.

"Oh, I was just polishing a holy stone. Just as prophetic words will not reach a stagnant heart, the twinkle of stars will not reside in a cloudy stone."


A boy from an orphanage. Raigh's twin brother.
He's cheerful and tender-hearted. Appears in
Fire Emblem: The Binding Blade.

Tome of Reason
Mt: 14 Range: 2
At start of turn, if unit is within 2 spaces of an
ally, grants Def/Res+6 to unit and allies within
2 spaces for 1 turn. At start of combat, if unit's
HP ≥ 25%, grants Atk/Spd/Def/Res+4 during
combat.
This skill can only be equipped by its original unit.

Rally Up Res+
Range: 1
Grants Res+6 to target ally and allies within
2 spaces of target (excluding unit) for 1 turn.
Cannot use:

Atk Feint 3
If a Rally Assist skill is used by unit or targets
unit, inflicts Atk-7 on foes in cardinal directions
of unit through their next actions.
Cannot use:

"Hello, I'm Lugh! I may look a little inexperienced, but I'm good with magic. It's great to be here!"

Power up your allies and defeat your foes in one fell swoop!