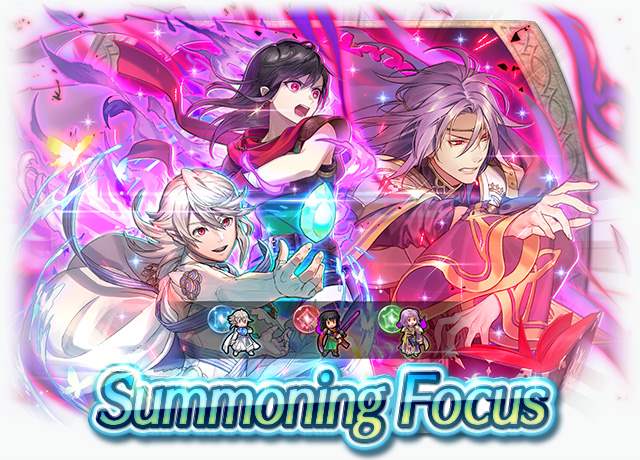 Three Heroes with Null skills are available as part of a 5★ summoning focus!

Heroes with Null skills can neutralize effects that guarantee their foe's follow-up attacks and effects that prevent the Hero from performing counterattacks during combat.


Prince Lyon of Grado, having become a vessel
for the Demon King Fomortiis's power. It is
uncertain who directs his heart. Appears in
Fire Emblem: The Sacred Stones.

Blood Tome
Mt: 14 Range: 2
Grants Atk+3. If foe uses bow, dagger, magic,
or staff, reduces damage from area-of-effect
Specials by 80% (excluding Røkkr area-of-
effect Specials) and reduces damage from
foe's attacks by 50%, and if foe is also
colorless, grants weapon-triangle advantage
to unit and inflicts weapon-triangle
disadvantage on foe.
This skill can only be equipped by its original unit.
Note: The 50% reduction in damage from foe's attacks only applies to damage received from attacks during combat. It does not apply to damage received before or after combat from skills such as Deathly Dagger or Pain.

Bonus Doubler 3
Grants bonus to Atk/Spd/Def/Res during
combat = current bonus on each of unit's stats.
Calculates each stat bonus independently.
Cannot use:

Rouse Atk/Res 3
At start of turn, if unit is not adjacent to an ally,
grants Atk/Res+6 to unit for 1 turn.
Cannot use:

"Is the Demon King controlling me? Or has he simply clawed his way into the dark corners of my mind?"


Foster daughter of Eyvel, mistress of Fiana. As
part of a wicked plot, she laid hands on a cursed
sword. Appears in Fire Emblem: Thracia 776.

Shadow Sword
Mt: 16 Range: 1
Accelerates Special trigger (cooldown count-1).
If unit's HP ≥ 50% and unit initiates combat,
unit can make a follow-up attack before foe
can counterattack.
This skill can only be equipped by its original unit.

Luna
Cooldown: 3
Treats foe’s Def/Res as if reduced by 50% during
combat.
Cannot use:

A Hoshidan prince raised in another Nohr. He
understands young Azura's feelings very well.
They are the best of friends. Appears in Fire
Emblem Fates.

Draconic Rage
Mt: 16 Range: 1
Accelerates Special trigger (cooldown count-1).
If the number of allies within 2 spaces
(excluding unit) > the number of foes within 2
spaces (excluding target), grants Atk/Spd+5
during combat. If foe's Range = 2, calculates
damage using the lower of foe's Def or Res.
This skill can only be equipped by its original unit.

Atk/Def Bond 3
If unit is adjacent to an ally, grants Atk/Def+5
during combat.

Hone Dragons
At start of turn, grants Atk/Spd+6 to adjacent
dragon allies for 1 turn.
Cannot use:

"If I can do my part to help protect someone I care about...if they're smiling...who I am doesn't matter."

This is a very useful skill for Aether Raids.