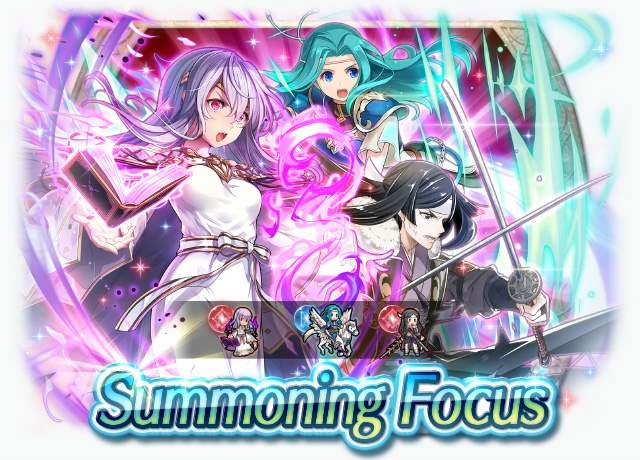 During the ninth day of the Book V Midpoint celebration, three Heroes with Iceberg skills are available as part of a 5★ summoning focus!

Heroes with Iceberg have their Special damage boosted by 50% of their Res.


Inheritor of the Book of Naga. Manipulated by
Manfroy, she has grown hostile toward Seliph.
Appears in Fire Emblem: Genealogy of the
Holy War.

Dark Scripture
Mt: 14 Range: 2
Grants Atk+3. If unit is not adjacent to an ally,
inflicts Atk/Res-6 on foe during combat, and if
foe does not have "effective against dragons,"
unit makes a guaranteed follow-up attack.
This skill can only be equipped by its original unit.

Atk/Res Solo 4
If unit is not adjacent to an ally, grants
Atk/Res+7 during combat.

Light and Dark
Inflicts Atk/Spd/Def/Res-2 on foe, neutralizes
foe's bonuses (from skills like Fortify, Rally,
etc.), and disables foe's skills that "calculate
damage using the lower of foe's Def or Res"
during combat.
This skill can only be equipped by its original unit.

Panic Smoke 3
Inflicts【Panic】on target and foes
within 2 spaces of target after combat.

【Panic】
Converts bonuses on target into penalties
through its next action.


The upright and dignified princess of the
Chon'sin dynasty. She has a direct approach
and never forgives a crooked deed. Appears
in Fire Emblem Awakening.

Amatsu
Mt: 16 Range: 1
Accelerates Special trigger (cooldown count-1).
At start of combat, if unit's HP ≥ 50%, unit can
counterattack regardless of foe's range.
This skill can only be equipped by its original unit.

Kestrel Stance 3
If foe initiates combat, grants Atk/Spd+6 during
combat and inflicts Special cooldown charge -1
on foe per attack. (Only highest value applied.
Does not stack.)
Cannot use:

"Humans are forged in the fires of adversity. So I learned by living hand to mouth, war to war."


A pegasus knight of Ilia. Older sister of Farina
and Florina. A knight full of pride for both her
country and family. Appears in Fire Emblem:
The Blazing Blade.

Pegasus Flight 3
At start of combat, if unit's Spd ≥ foe's Spd-7,
inflicts penalty on foe's Atk/Def during combat
= 50% of difference between Res stats
(unit’s Res minus foe’s Res) before combat.
(Maximum penalty of -7.)
Cannot use:

"Discipline demands order in life. So...are you getting enough sleep? I must insist you turn in early tonight."

I recommend teaching this skill to Heroes with high Res!